My thought was that if lookahead improves performance during some period of the training, it's liable to develop mesa-optimization during that period, and then find it to be a useful for other things later on.

Now it's true that efficiently estimating that conditional using a single forward pass of a transformer might involve approximations to beam search sometimes.

At a high level, I don't think we really need to be concerned with this form of "internal lookahead" unless/until it starts to incorporate mechanisms outside of the intended software environment (e.g. the hardware, humans, the external (non-virtual) world).

Is there an easy way to detect if it's started doing that / tell it to restrict its lookahead to particular domains? If not, it may be easier to just prevent it from mesa-optimizing in the first place. (The post has arguments for why that's (a) possible and (b) wouldn't necessarily involve a big performance penalty.)

bpunk on How often do series C startups fail to exit?


Two things to keep in mind when you are making your choice:

1) Exercising isn't a binary decision; you can exercise a portion of your options (ex) exercise 40% and leave 60% on the table to expire. This lets you factor in your personal financial status when you are deciding on your course of action.

2) Many series C startups don't fail or exit. Once a company gets to that size it has a momentum of its own even if it isn't successful. In my case I've worked at 4 startups. Two have exited while the other two are still stumbling along. I left one of the stumblers over 15 years ago so they can go on quite a while!


While we don't have controlled studies, married people do tend to be happier. Overall, many married people find the companionship of having another person to spend their life with fulfilling, rewarding, comforting, and generally very positive.

There is a risk of an unhappy marriage, but there is also a risk of missing out on what could be a really important relationship.

You could consider talking to people a few decades older than you who seem like the kind of people you might be in a few decades time, and asking whether they're married and how they feel about it?


I recently realized that I've been confused about an extremely basic concept: the difference between an Oracle and an autonomous agent.

This feels obvious in some sense. But actually, you can 'get' to any AI system via output behavior + robotics. If you can answer arbitrary questions, you can also answer the question 'what's the next move in this MDP', or less abstractly, 'what's the next steering action of the imaginary wheel' (for a self-driving car). And the difference can't be 'an autonomous agent has a robotic component'.

The essential difference seems to be that the former system only uses its output channels whenever it is probed, whereas the second uses them autonomously. But I don't ever hear people make this distinction. I think part of the reason why I hadn't internalized this as an axis before is that there is the agent vs. nonagent thing, but actually, those are orthogonal to each other. We clearly can have any of the four combinations of {agent, nonagent} × {autonomous, non-autonomous}.[1] 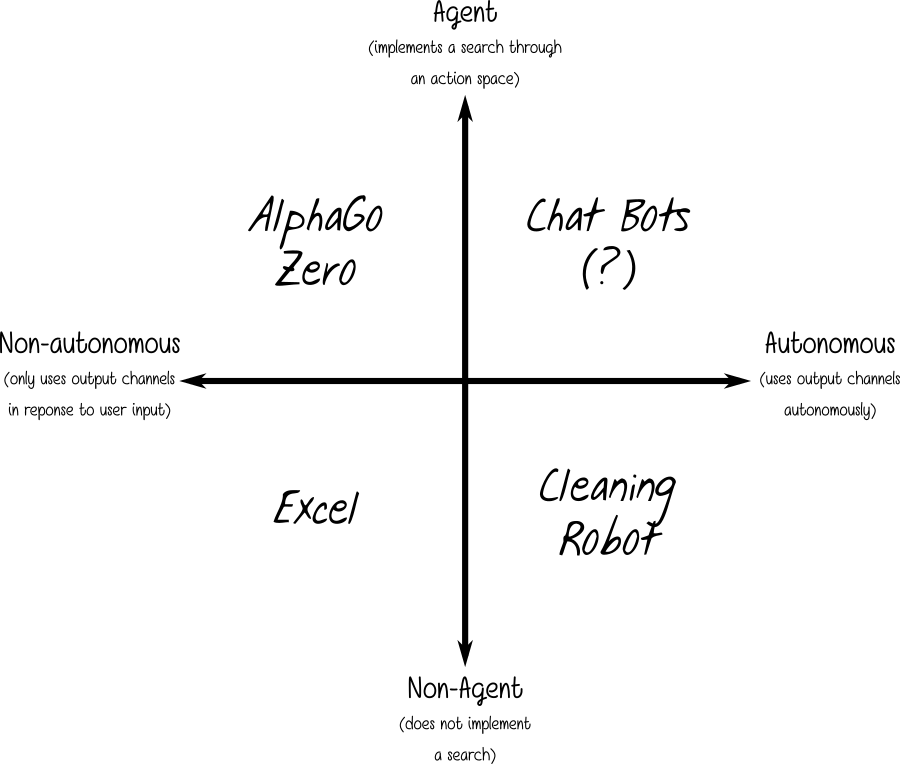 It's a pretty bad sign that I don't know without looking at the definition whether 'tool AI' refers to the entire bottom half or just the bottom-left quadrant. With looking, it seems to be just the latter.

What led me to this was thinking about Corrigibility. I think it is applicable to the entire top half, all agent-like systems, but it feels like a stronger requirement for the top right, autonomous agents. If you have an oracle, then corrigibility seems to reduce to 'don't try to influence user's behavior through your questions'.

When I look at this, I am convinced by the arguments that we probably can't just build Tool AI, but I super want the most powerful systems of the future be non-autonomous. That just seems to be way safer without sacrificing a lot of performance. I think because of this, I've been thinking of IDA as trying to build non-autonomous systems (basically oracles), even though the sequence pretty clearly seems to have autonomous systems in mind.[2] On the other hand, Debate seems to be primarily aimed at non-autonomous systems, which (if true) is an interesting difference.

So is all of this just news to me, and actually everyone is aware of this distinction?


It's worth noting that the R-squared value for a linear trend-line for 2000-2019 data has R2=0.07 so a constant prediction of 750k acres would only be marginally less accurate. (I think your excluding 2020 graph also excludes 2019 but the story doesn't change much either way)

It looks like up until 2016 everything was fairly constant and since then 3 out of 4 years have been bad.

Now assume that, instead of just one result overall, you produce a single result every year. Most of the results in the sequence have alignment : capability ratio way above the rest of the world, but then there is a year in which the ratio is only barely above the rest of the world. In this case, you are better off not publishing the irregular result, even though the naive ratio criterion says to publish. We can reconcile it with the previous model by including your own research in the reference, but it creates a somewhat confusing self-reference.

Second, we can switch to modeling the research output of the rest of the world as a random walk. In this case, if the average direction of progress is pointing towards failure, then moving along this direction is net negative, since it reduces the chance to get success by luck.

christiankl on I'm Voting For Ranked Choice, But I Don't Like It


It seems to me that there are a lot of times where people vote in our societies. In many cases people don't spend much time thinking about voting systems and simply go for the default in their country.

christiankl on The Wiki is Dead, Long Live the Wiki! [help wanted]


I might be too much in the German way of nanimg things but tagwiki seem superior to twiki. Twiki is unclear to pronounce (do you say it as T wiki or TW iki?) and also not explainatory to someone who doesn't understand it.

christiankl on What AI companies would be most likely to have a positive long-term impact on the world as a result of investing in them?


It seems unclear to me that stock investments in big tech companies have a significant effect on those companies.

Both Alphabet and Microsoft have more then  $100 billion cash at hand at the moment. They are not cash-constraint.