With everyone staying home, cities make a lot less sense. Many people who previously wanted to minimize their commutes are working from home, and could live anywhere. People who wanted to live close to friends and family aren't seeing them. People who like to go to restaurants, bars, clubs, or dances aren't doing that either. On the other hand, the benefits of living farther out, such as space, proximity to nature, and cost, are if anything even more important. So I've seen a stream of friends posting about how they're leaving Boston, NYC, SF, and other cities, at least for now.

I track Boston rental listings for my rent map, and you can see this reflected in the data. Here are new two-bedroom listings for the last three months, compared to the same three months last year: 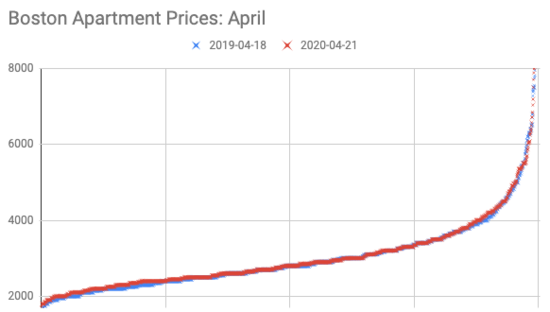 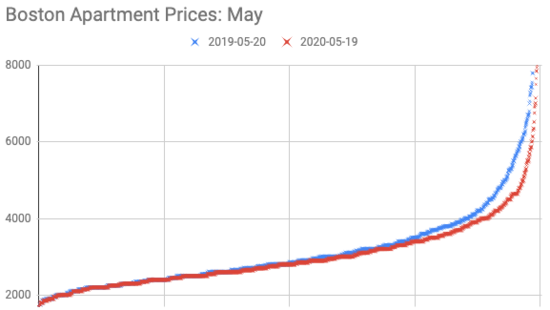 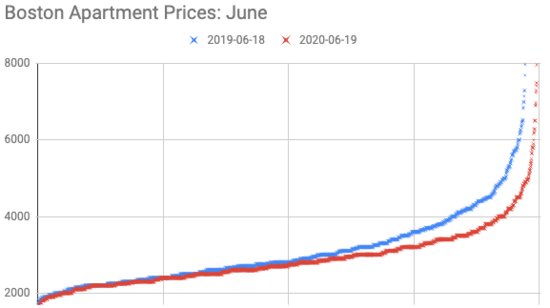 This makes sense: the people renting expensive units are probably disproportionately people who can work from anywhere remotely, and people who in normal times are highly reliant on the city for entertainment. I expect it's even more dramatic in SF, where so much of the housing boom has been driven by tech employment.

I think we're probably not done, though. Many landlords are small, and slow to react to changing market conditions. We're playing reverse musical chairs, where many landlords are going to be stuck without a tenant come September first. The ones who have realized this are offering lower rents, trying to keep their tenants, and as we get closer to September I expect more will catch on.

If you're a tenant you can probably negotiate lower rent. Or, higher risk, higher expected value, wait longer and hope for prices to fall further. We may see some pretty desperate landlords.

Where does this leave me? While I'm a landlord, I'm on the side of tenants here. I care much more that friends and neighbors aren't priced out than that we make the highest possible rent from our rooms. I'm happy to see rents falling, though I wish it were "we built an enormous amount of new housing" and not "there's a pandemic". The arrangement we have with our tenants is that in mid-August we look at what comparable units are going for, and use that as our rent for the next year. I'm expecting that will be down, and I'm OK with that.

Longer-term, I'm very curious whether will see a reversal of the past decade where cities had been growing more and more desirable relative to the rest of the country. I can see a world where post-covid there's a lot of remote work, people are nervous about density, people have become more attached to having a lot of space, and people have formed new communities farther out. On the other hand, I can also see a world where when this is over people are eager to get back to where they were, and I've had enough isolation for a lifetime. Luckily I don't need to decide whether to buy a house right now!

How would you recommend negotiating with a landlord over the price of rent? In my case, we’re new tenants. The landlords work out of an office that’s right next door to our house. It seems unlikely that we could negotiate lower rent if the lease isn’t up for renewal. And they’d be able to make trouble for us if we did - our girlfriends bring dogs over, for example, and they could start harassing us about stuff like that. Better to say nothing?

I'm writing from a bit of a Boston perspective, and it's lease renewal season around here, so I was thinking mostly in terms of people renewing or moving. If your lease isn't up yet, then unless what you're paying has dramatically diverged from the local market or you're just not able to pay the full amount, I'd expect negotiating for lower rent not to work all that well right now?