How does personality vary across US cities?

In 2007, psychology researchers Michal Kosinski and David Stillwell released a personality testing app on Facebook app called myPersonality. The app ended up being used by 4 million Facebook users, most of whom consented to their personality question answers and some information from their Facebook profiles to be used for research purposes.

The very large sample size and matching data from Facebook profiles make it possible to investigate many questions about personality differences that were previously inaccessible. Koskinski and Stillwell have used it in a number of interesting publications, which I highly recommend (e.g. [1], [2] [3]).

In this post, I focus on what the dataset tells us about how big five personality traits vary by geographic region in the United States.

The Five Factor Model of Personality

The Five Factor Model (FFM) or Big Five personality trait model is currently the dominant paradigm in personality research. The model is founded on the lexical hypothesis:

When people are asked questions about whether various adjectives describe them (or describe someone who they know), their answers are pairwise correlated with one another. Applying factor analysis to the responses yields a small number of underlying factors that explain a large fraction of the variance common to the answers.

Empirically, it's been found that a model with 5 factors often fits the data well (though some researchers claim that one gets 6 or 7 factors if one uses a question battery that fully exhausts descriptive adjectives, see e.g. the HEXACO model of personality and The Big Seven Model of Personality and Its Relevance to Personality Pathology for more information).

The five factors referred to as the "Big Five" are labelled extraversion, neuroticism, agreeableness, conscientiousness and openness. I will describe these more below.

It's likely that the Big Five personality model falls far short of carving reality at its joints, and I'm in broad agreement with the stance that Jack Block expresses in A contrarian view of the five-factor approach to personality description. Nevertheless, the five factors in the model satisfy some desirable criteria, such as

and much of the data that's available uses Big 5 personality questionnaires, so it's often what we have to work with.

There were ~680k Americans who both answered 20+ questions on a Big Five Personality Test, and who made their hometown available to researchers. After excluding hometowns with <= 30 users, about ~3500 hometowns were represented. Questions were answered on a scale from 1 (strongly disagree) to 5 (strongly agree).

I estimated personality trait averages for each city using Bayesian hierarchical modeling in order to account for regression to the mean when sample sizes are small. This results in relatively large cities being more prominently represented at the extremes of the estimates, on account of the larger sample sizes making it possible to have greater confidence in city averages deviating substantially from the mean. A CSV file with all estimates of city averages is available on Dropbox.

The units in the graphs below are standard deviations away from the mean of the entire sample. Roughly speaking, average self-reported personality by city varies from -0.2 to 0.2 standard deviations from the mean. However, this likely understates the magnitudes of differences in underlying traits across cities, owing to people anchoring on the people who they know when answering the questions rather than anchoring on the national population, as described in Birds of a feather do flock together: behavior and language-based personality assessment reveal personality homophily among couples and friends:

Friends and spouses tend to be similar in a broad range of characteristics (i.e. homophily), such as age, educational level, attitudes, values, and general intelligence. Surprisingly, little evidence has been found for similarity in personality—one of the most fundamental psychological constructs. We argue that the lack of evidence for personality homophily derives from the tendency of individuals to make personality judgments in relation to a salient comparison group rather than in absolute terms when responding to the self-report and peer-report questionnaires commonly used in personality research (i.e. reference-group effect) 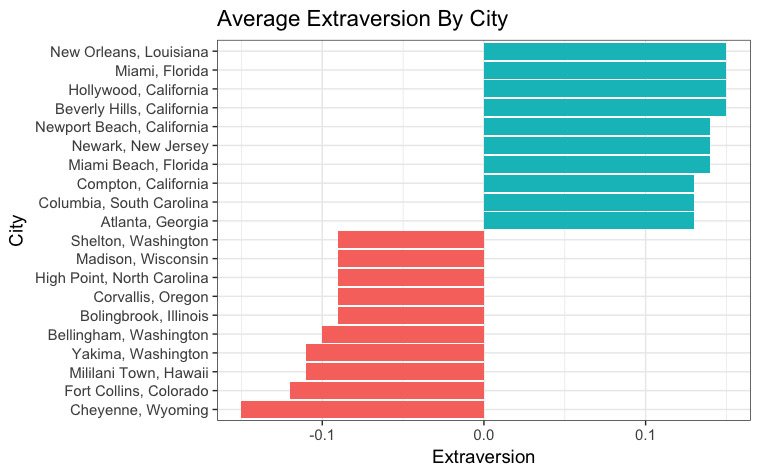 The appearance of New Orleans, Miami, Hollywood, Beverly Hills and Newport Beach as amongst the highest on average extraversion is consistent with the the cities' reputations as having high prevalence of partying & socialization. New Orleans and Miami are both highest average extraversion in the data, and 2 of the 3 American cities on this list flist of top 20 party cities in the world.

Andrew J. Ho comments that the high frequency of cities in Washington state reminds him of the Seattle Freeze:

Newcomers to the area have described Seattleites as being standoffish, cold, distant, and not trusting.[3] While in settings such as bars and parties, people from Seattle tend to mainly interact with their particular clique.[4] One author described the aversion to strangers as: "people are very polite but not particularly friendly."[5] In 2008 a peer-reviewed study published in Perspectives on Psychological Science found that among all states, Washington residents ranked 48th in the personality trait extroverted.

Ethnicity as an underlying factor

Washington DC and Atlanta stand out as having unusually large African American populations, constituting roughly 50% of the population. From Wikipedia:

Atlanta has long been known as a center of black wealth, political power and culture; a cradle of the Civil Rights Movement[1] and home to Dr. Martin Luther King, Jr. It has often been called a "black mecca".

The researchers behind the myPersonality app labelled the Facebook profile photos of a subset of the users by their race, so we can stratify by race. The numbers of people for whom we have labelled photos are given below, by race. 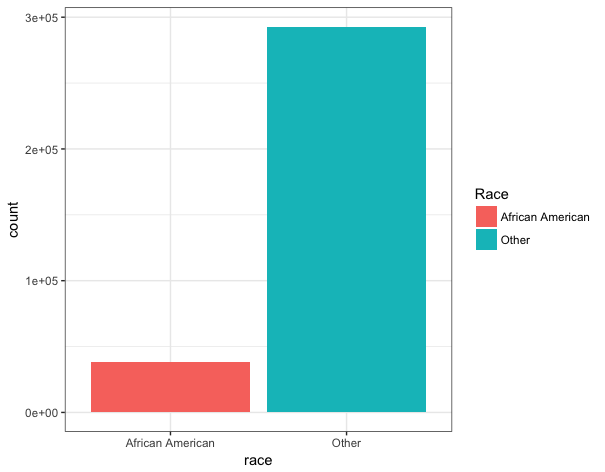 The people in cities with low average neuroticism are heavily disproportionately African-American: 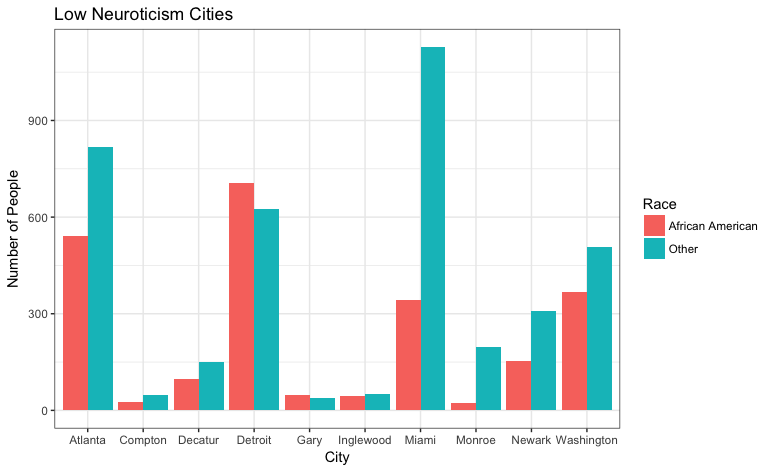 whereas for high neuroticism cities the reverse is true: 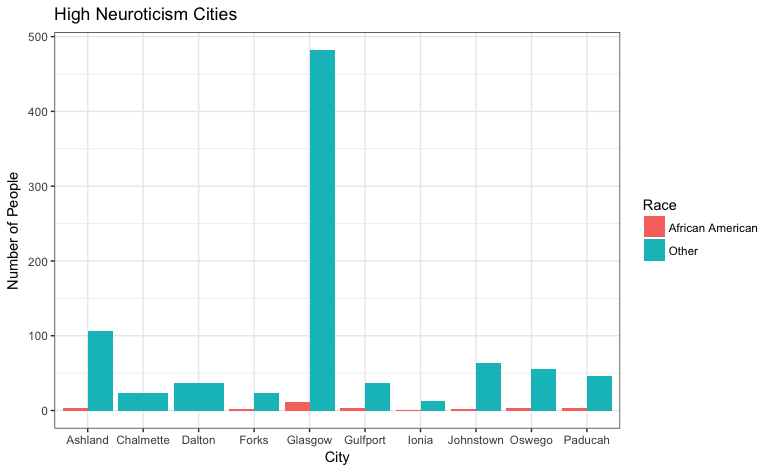 This is not a coincidence. In fact, for the sample as a whole, African Americans' self-reported neuroticism is a full 0.2 standard deviations lower than the rest of the population. This remains true even if we restrict attention to a particular city, like Washington DC: 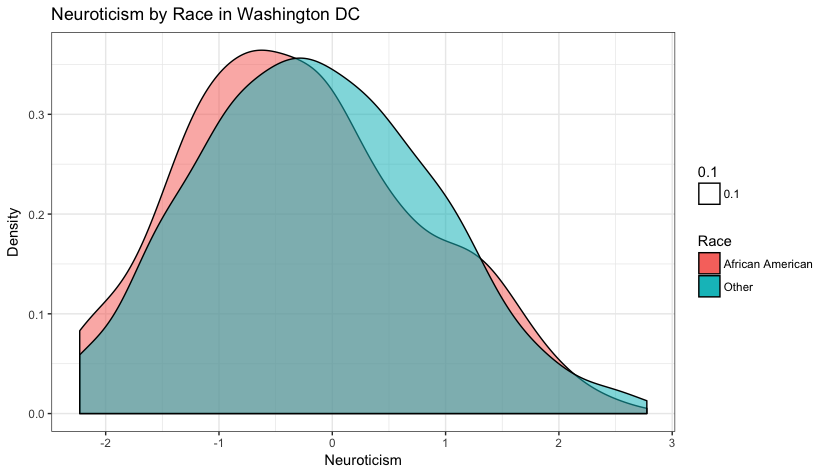 The finding of African Americans being relatively low on neuroticism is consistent with the literature on national differences in personality. The figure below is from The Geographic Distribution of Big Five Personality Traits: Patterns and Profiles of Human Self-Description Across 56 Nations. It depicts estimates of average neuroticism by continent, showing that Africans are as a group noticeably lower in neuroticism than people from other continents. 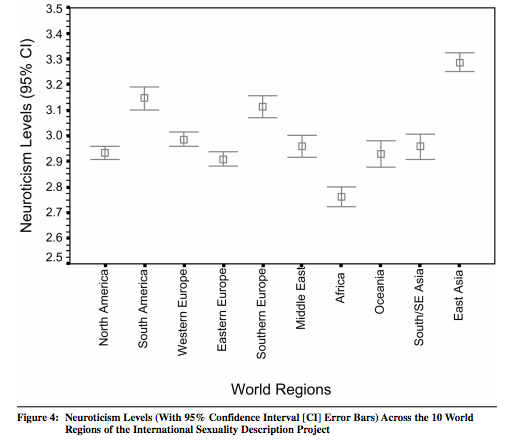 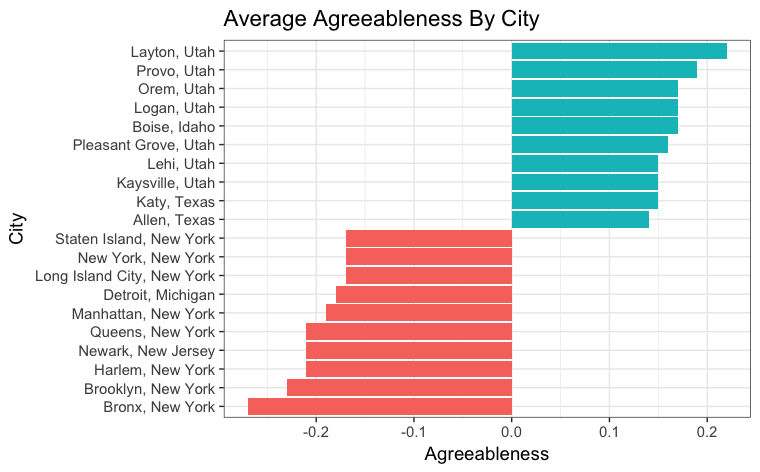 Seven of the 10 cities with highest average agreeableness are in Utah. This corresponds to Utah residents being almost 60% Mormon: as a group, Mormons have exceptionally high average agreeableness. One can do an analysis similar to the one that I did with race and neuroticism. I'll return to this later in the context of a more systematic discussion of agreeableness and religion.

The fact that 8 of the 10 cities listed correspond to some burrough of New York City is in accordance with stereotypes around New Yorkers being unfriendly / mean / aggressive / rude (c.f. New York City Ranked Sixth Most Unfriendly City in the World, Survey Finds). 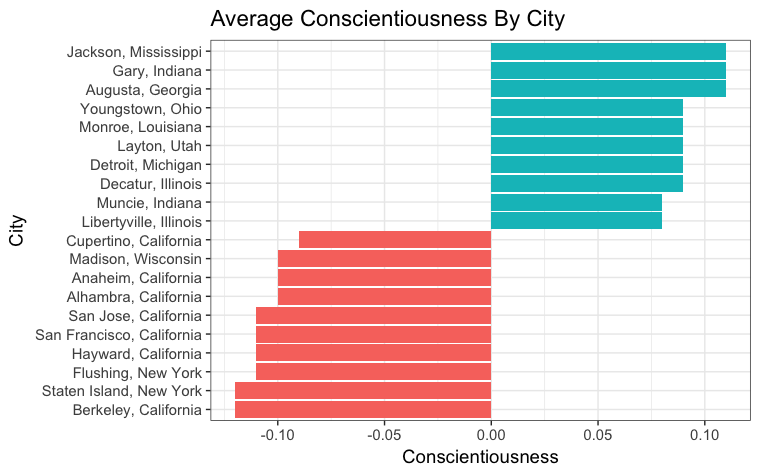 Low conscientiousness in the Bay Area

It's striking that each of Berkeley, San Francisco, San Jose, Hayward and Cuptertino make the list of 10 cities with lowest average conscientiousness, while simultaneously all being in the Bay Area.

Connection with the in person rationalist community?

The finding that Bay Area residents skew toward unusually low conscientiousness should be of especially strong interest to the rationalist community in light of the fact that the Bay Area has become the central hub of community activity.

Slightly shifting the subject, in the 2016 Less Wrong Diaspora Survey, those respondents who reported to having involvement with the in-person community reported to being clincially diagnosed with ADHD with frequency ~20%, roughly 2x more frequently than those who reported to having no involvement with the in person community. Low conscientiousness is known to associate with ADHD, with people who have been diagnosed with ADHD scoring an average of 1 standard deviation below the population mean. In light of these things, it seems possible that there's some connection between high rates of clinical diagnosis of ADHD amongst people being involved with the in person community, and Bay Area residents being unusually low conscientiousness.

As with low extraversion, I'd welcome any ideas on what differentiates the cities with high average conscientiousness from others... 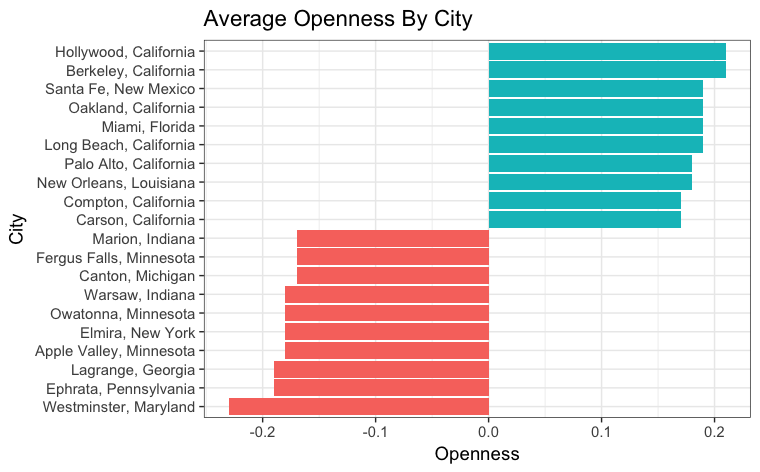 Openness is associated with artistic interests. Hollywood is the center of cinema in the United States. Sante Fe and New Orleans are considered two of the ten most artistic cities in America. So their appearance near the top of the list is in consonance with expectations.

Openness is known to be strongly predictive of liberal political affiliation (c.f. The Secret Lives of Liberals and Conservatives: Personality Profiles, Interaction Styles, and the Things They Leave Behind). So the appearance of many coastal California cities is also in consonance with expectations.

There's much more to say about personality and demographics, and I plan on writing more along these lines.