Digital Immortality Map: How to collect enough information about yourself for future resurrection by AI

The term “Digital immortality” is often confused with the notion of mind uploading, as the end result is almost the same: a simulated brain in a computer. https://en.wikipedia.org/wiki/Digital_immortality

But here, by the term “Digital immortality” I mean reconstruction of the person based on his digital footprint and other traces by future AI after this person death.

Mind uploading in the future will happen while the original is still alive (or while the brain exists in a frozen state) and will be connected to a computer by some kind of sophisticated interface, or the brain will be scanned. It cannot be done currently.

On the other hand, reconstruction based on traces will be done by future AI. So we just need to leave enough traces and we could do it now.

But we don’t know how much traces are enough, so basically we should try to produce and preserve as many traces as possible. However, not all traces are equal in their predictive value. Some are almost random, and others are so common that they do not provide any new information about the person.

Creating traces is an affordable way of reaching immortality. It could even be done for another person after his death, if we start to collect all possible information about him.

Basically I am surprised that people don’t do it all the time. It could be done in a simple form almost for free and in the background – just start a video recording app on your notebook, and record everything into shared folder connected with a free cloud. (Evocam program for Mac is excellent, and mail.ru provides up 100gb free).

But really good digital immortality require 2-3 month commitment for self-description with regular every year updates. It may also require maximum several thousand dollars investment in durable disks, DNA testing, videorecorders, and free time to do it.

I understand how to set up this process and could help anyone interested.

The idea of personal identity is outside the scope of this map. I have another map on this topic (now in draft), I assume that the problem of personal identity will be solved in the future. Perhaps we will prove that information only is enough to solve the problem, or we will find that continuity of consciousness, but we will be able to construct mechanisms to transfer this identity independently of information.

Digital immortality requires a very weak notion of identity. i.e. a model of behavior and thought processes is enough for an identity. This model may have some differences from the original, which I call “one night difference”, that is the typical difference between me-yesterday and me-today after one night's sleep. The meaningful part of this information has size from several megabytes to gigabits, but we may need to collect much more information as we can’t now extract meaningful part from random.

DI may also be based on even weaker notion of identity, that anyone who thinks that he is me, is me. Weaker notions of identity require less information to be preserved, and in last case it may be around 10K bytes (including name, indexical information and basic traits description)

But the question about the number of traces needed to create an almost exact model of a personality is still open. It also depends on predictive power of future AI: the stronger is AI, the less traces are enough.

Digital immortality is plan C in my Immortality Roadmap, where Plan A is life extension and Plan B is cryonics; it is not plan A, because it requires solving the identity problem plus the existence of powerful future AI.

I created my first version of it in the year 1990 when I was 16, immediately after I had finished school. It included association tables, drawings and lists of all people known to me, as well as some art, memoires, audiorecordings and encyclopedia od everyday objects around me.

There are several approaches to achieving digital immortality. The most popular one is passive that is simply videorecording of everything you do.

My idea was that a person can actively describe himself from inside. He may find and declare the most important facts about himself. He may run specific tests that will reveal hidden levels of his mind and sub consciousness. He can write a diary and memoirs. That is why I called my digital immortality project “self-description”.

Structure of the map

This map consists of two parts: theoretical and practical. The theoretical part lists basic assumptions and several possible approaches to reconstructing an individual, in which he is considered as a black box. If real neuron actions will become observable, the "box" will become transparent and real uploading will be possible.

There are several steps in the practical part:

- The first step includes all the methods of fixing information while the person of interest is alive.

- The second step is about preservation of the information.

- The third step is about what should be done to improve and promote the process.

- The final fourth step is about the reconstruction of the individual, which will be performed by AI after his death. In fact it may happen soon, may be in next 20-50 years.

There are several unknowns in DI, including the identity problem, the size and type of information required to create an exact model of the person, and the required power of future AI to operate the process. These and other problems are listed in the box on the right corner of the map.

The pdf of the map is here, and jpg is below.

A Roadmap: How to Survive the End of the Universe 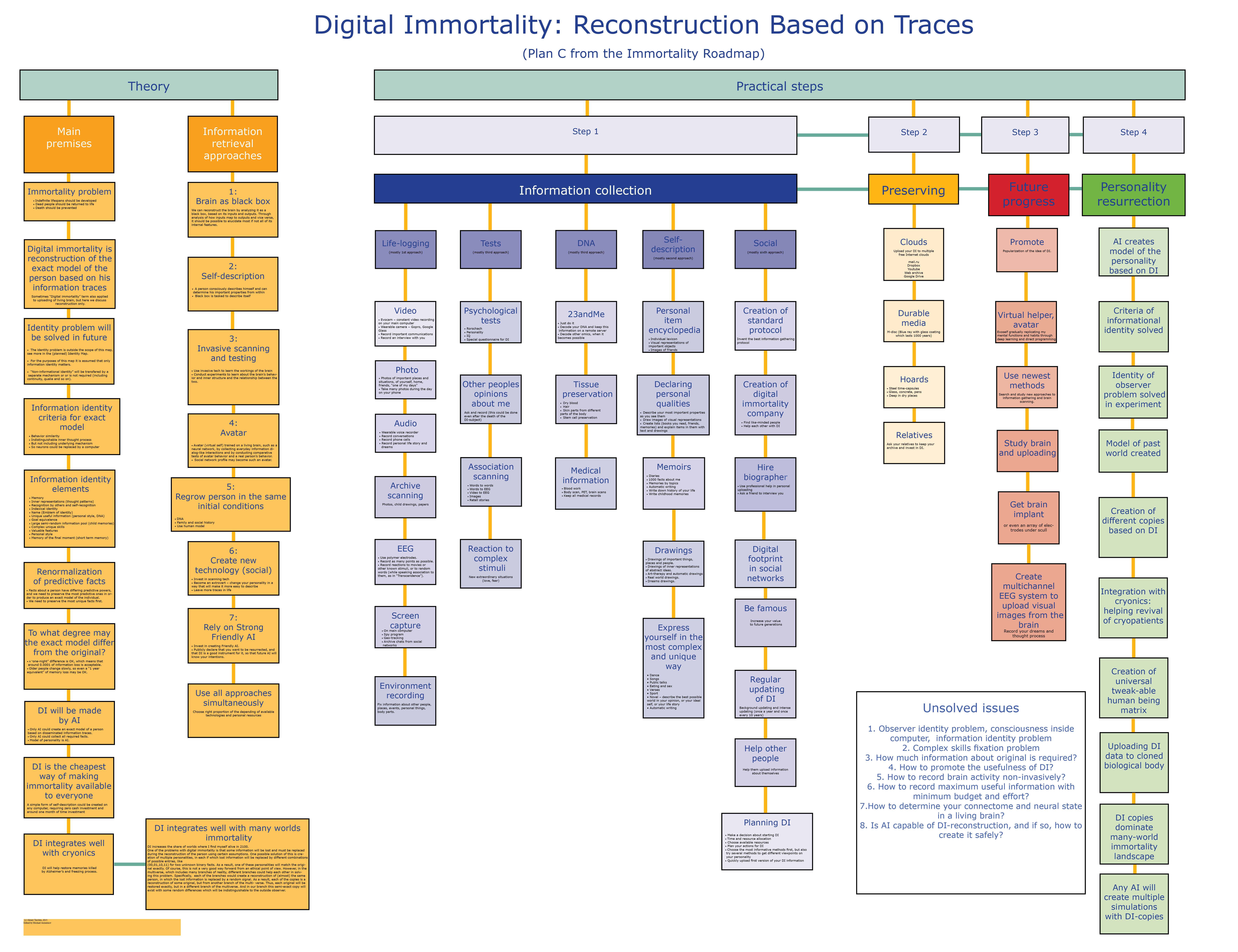