(This post was collaboratively written together with Duncan Sabien.)

Startup founders stereotypically experience some pretty serious mood swings.  One day, their product seems destined to be bigger than Google, and the next, it’s a mess of incoherent, unrealistic nonsense that no one in their right mind would ever pay a dime for.  Many of them spend half of their time full of drive and enthusiasm, and the other half crippled by self-doubt, despair, and guilt.  Often this rollercoaster ride goes on for years before the company either finds its feet or goes under. 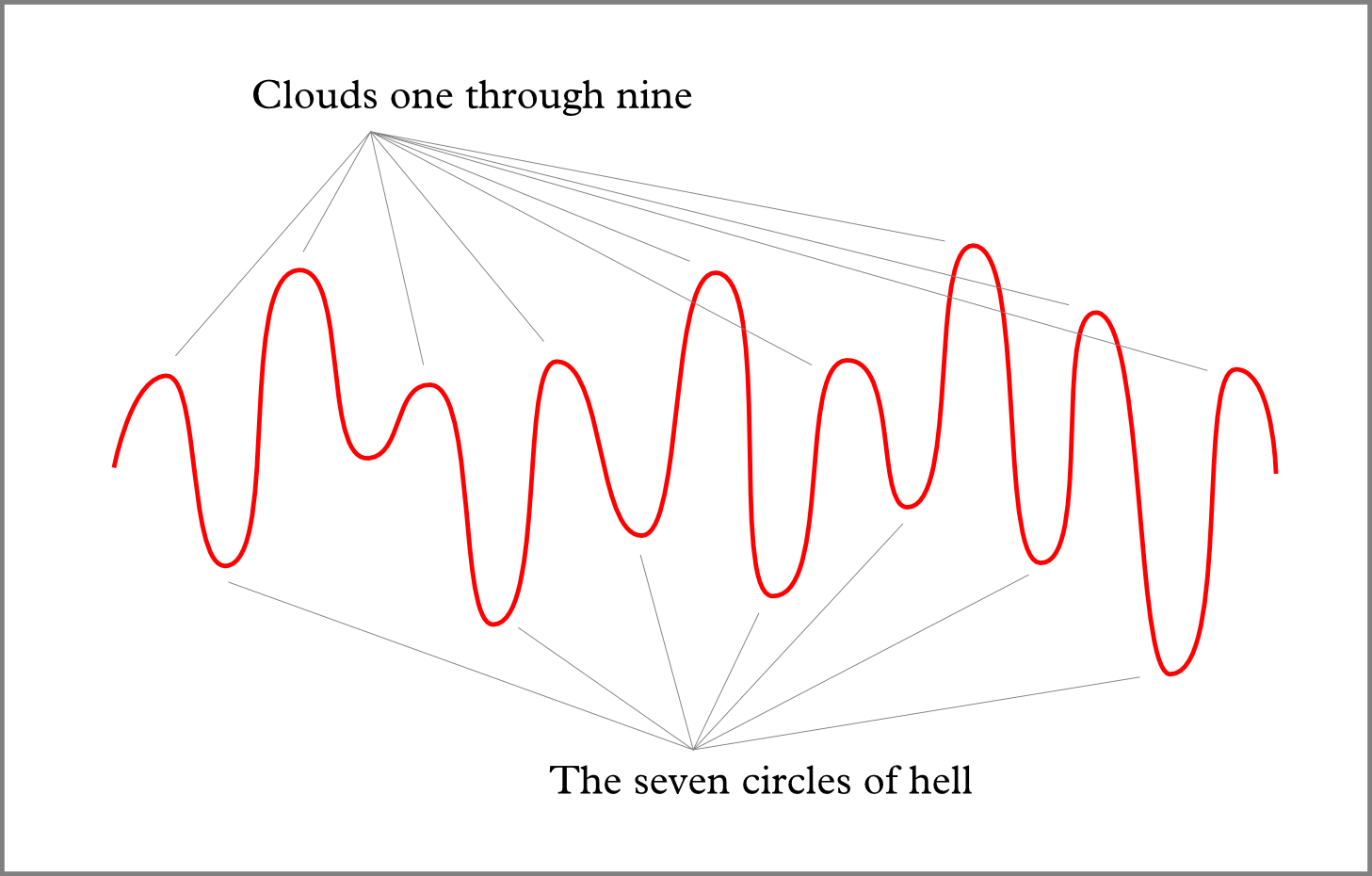 Well, sure, you might say.  Running a startup is stressful.  Stress comes with mood swings.

But that’s not really an explanation—it’s like saying stuff falls when you let it go.  There’s something about the “launching a startup” situation that induces these kinds of mood swings in many people, including plenty who would otherwise be entirely stable.

There are plenty of stressful situations which don’t cause this sort of high-magnitude cycling.  Waiting on blood test results from a cancer scare, or applying to prestigious colleges or companies, or working as a subordinate startup employee[1]—these are all demanding, emotionally draining circumstances, but they don’t induce the same sort of cycling.

Contrast those situations with these:

... all of which have been known to push people into the same kind of oscillation we see in startup founders.  As far as we can tell, there are two factors common to all of these cases: they’re situations in which people must work really, really hard to have any hope of success, and they’re also situations in which people aren’t at all sure what kinds of work will get them there.  It’s not a response to high pressure or uncertainty, it’s a response to high pressure and uncertainty, where uncertainty means not just being unsure about which path to take, but also about whether the paths (and the destination!) are even real.

It’s easy to point to the value in euphoria and optimism.  You get lots of code written, recruit lots of funding and talent, write a perfect draft—it’s the part of the cycle where you’re drawn to working seventy hour weeks, checking off each and every item from your to-do list.  But the “down” parts often feel like they’re pointless at best, and dangerous or counterproductive at worst.  Most of the online commentary on this phenomenon treats them as a negative; there’s lots of talk about how to break the pattern, or how to “deal with” the extremes.  In our own pasts, we found ourselves wondering why our brains couldn’t just hang on to the momentum—why they insisted on taking us through stupid detours of despair or shame before returning us back to apparent “forward motion”.

Interesting things happened when we began treating that question as non-rhetorical.  What, we wondered, might those down cycles be aimed at?  If we were to assume that they were, on some level, useful/intentional/constructive, then what sorts of instrumental behavioral patterns were they nudging us toward?

Imagine breaking the two parts of the cycle into two separate people, each of whom is advising you as you move a startup forward.  One of them is the voice of confidence—the classic "inside view"—with a clear sense of the possibilities and lots of enthusiasm for next actions.  The other is the voice of pessimism, with a range of doubts and concerns from the object level all the way up to the fundamental assumptions of your whole project.

A naive manager might assume that one of these advisors is better than the other.  Certainly one of them is more “pleasant” to have around.  But it’s almost trivially obvious that you’ll build better models and more robust plans if you keep both of them involved.  It’s not just about balancing positive and negative outlooks, or constructive and destructive impulses (although that’s a part of it).  It’s about the process of building an accurate map in unexplored territory, which often requires a kind of leapfrogging of provisional model-building and critical model-tearing-down. You start with a bad but workable model, collide it with reality, and then refine the model in response before colliding it again.  Both halves of the process are critical—a good entrepreneur needs both the ability to follow a line of thinking to its conclusion and the ability to throw the line away and start from scratch, and would be equally crippled by a lack of either.

Startup founders, aspiring filmmakers, and would-be worldsavers “have to” be enthusiastic and positive.  They have to sell their models—to skeptical investors, to potential hires, and oddly often to themselves—and many people struggle to hold both determined confidence and fundamental uncertainty in their minds at the same time.  Instead, their brains use mood to encourage them to alternate.  The euphoric half of the cycle is where assumptions are taken to their conclusion—where you collide your models with reality by building code, attempting to enroll customers, and so on.  And the despair half is where those assumptions are challenged and questioned—where all of the fears and doubts and worrying bits of evidence that you’ve been holding off on looking at are allowed to come forward.

Interestingly, the real power of the down cycle seems to be less that it allows thoughts like “maybe my startup will never work,” and more that, because it allows such thoughts, it also allows “maybe my understanding of the sales landscape is wrong,” or “maybe the product manager we’ve just spent three months getting up to speed is actually a terrible fit for the team.”  Despair can be a key that unlocks whole swaths of the territory.  When you’re “up,” your current strategy is often weirdly entangled with your overall sense of resolve and commitment—we sometimes have a hard time critically and objectively evaluating parts C, D, and J because flaws in C, D, and J would threaten the whole edifice.  But when you’re “down,” the obviousness of your impending doom means that you can look critically at your past assumptions without having to defend anything.[2]

Moving forward (or backward, as the case may be)

Our recommendation: the next time you’re working on something large, important, and very, very uncertain, don’t resist the occasional slide into despair.  In fact, don’t even think of it as a “slide”—in our experience, it stops feeling like a slide as soon as you stop resisting it.  Instead, recognize it for what it is—a sign that important evidence has been building up in your buffer, unacknowledged, and that it’s time now to integrate it into your plans.

Understanding the subconscious intentionality behind this sort of mood swing doesn’t make it any less painful, but it can make it far more pleasant—easier to endure and easier to mine for value.  Think of it as an efficient and useful process for building accurate models under stressful uncertainty, and trust yourself to hold together in both states, resisting neither. 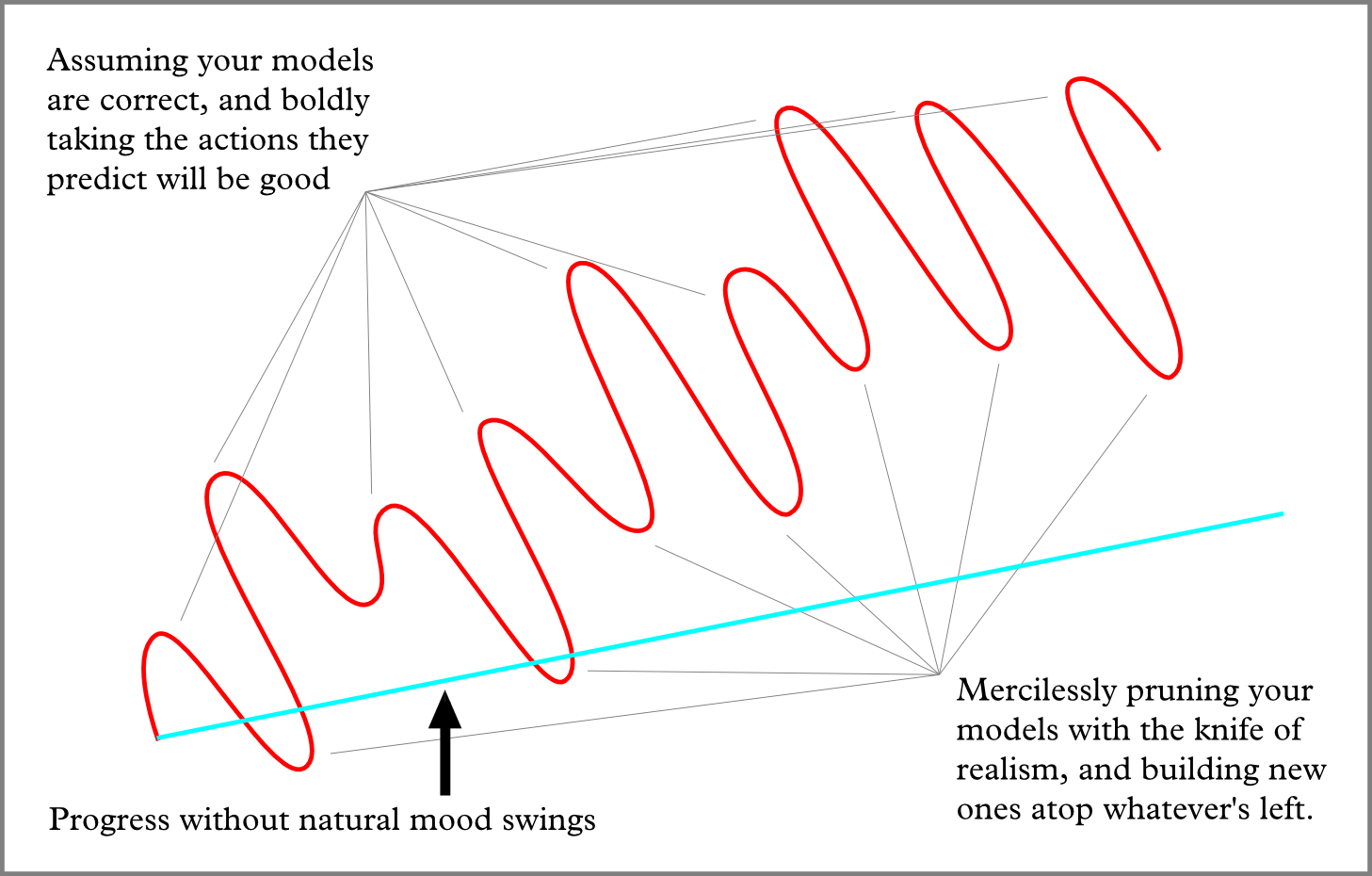 There’s a version of you that is good at moving forward—that has the energy to pour seventy hours a week into your current best guesses, stretching the parts of your model that are correct as far as they can go.  And there’s a version of you that is good at dealing with the darker side of reality—that is actually willing to consider the possibility that it’s all garbage, instead of just paying lip service to the idea.  Embrace each in turn, and the result can be periods of high productivity followed by periods of extreme flexibility, a combined strategy whose average utility often seems to outweigh the utility of an average strategy.

[1] The example of subordinate startup employees seems perhaps particularly revealing, since they share the same uncertainty and long hours as their bosses, but are not expected to come up with the same kinds of strategic solutions.

[2] Alternating between despair and forward motion may also be a good strategy given human working memory limitations. :)