We have a new paper out, presenting the 'aestivation hypothesis'. It's another attempt to reconcile the fact that cosmic expansion seems very easy, yet we see no trace of any alien group doing it.

The idea is that civilizations expand rapidly, but then 'go to sleep', while they wait for the temperature to drop and it becomes possible to do computations with maximal efficiency.

There are some few problems with the theory, though - mainly, why would the civilizations conceal themselves? Even if they were sleeping, they should have some automated processes rounding up intergalactic gases, preventing stars from drifting out of galaxies, and so on. 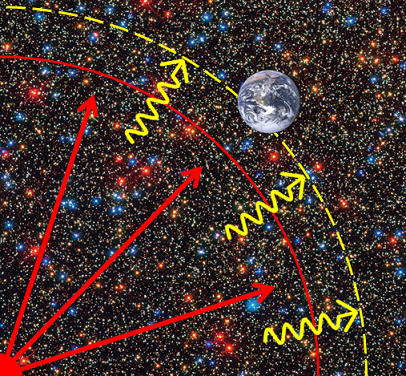 Here, a civilization is expanding from the red point, and will eventually reach Earth (drawn not entirely to scale). It's expanding at a decent fraction of light-speed. The red sphere is their physical expansion front, while the yellow sphere is the light expansion front. When that yellow reaches Earth, we will generally be able to notice their expansion, and have some time to react to it - unless they conceal themselves as they expand.

Why would they want to do that? It's not as if we could counter their expansion, or have any chance of resisting. But there is one thing that we might be able to do: flee. Imagine that we got a hundred years warning; we might be able to rush AI, Dyson the sun, build escape ships and launch them at a significant fraction of light speed, etc. They might never be able to catch us, and, as we or our AIs fled, we could develop technologies to reduce or damage our pursuers.

Therefore, it makes sense for the expanding civilization to conceal itself until it has any other civilizations completely surrounded. That means that Dyson swarms and other major feats of stellar engineering might be delayed by many years or decades by the red civilization. So that the 'noticeability front' - the distance at which other civilizations can see clear evidence of red's expansion - lags a bit behind their actual expansion front.