Information hazards: Why you should care and what you can do

We argue that many people should consider the risk that they could cause harm by developing or sharing (true) information. We think that harm from such information hazards [LW · GW] may sometimes be very substantial, and that this applies especially to people who research advanced technologies and/or catastrophic risks, or who often think about such technologies and risks.

However, constantly worrying about information hazards would be paralyzing and unnecessary. We therefore outline a heuristic for quickly identifying whether, in a given situation, it’s worth properly thinking about the hazards some information might pose, and about how to act given those hazards. This heuristic is based on the “potency” and “counterfactual rarity” of the information in question. We next outline, and give examples to illustrate, a range of actions one could take when one has identified that some information could indeed be hazardous.

Why should some people care about information hazards?

Data hazard: Specific data, such as the genetic sequence of a lethal pathogen or a blueprint for making a thermonuclear weapon, if disseminated, create risk.

[...] Idea hazard: A general idea, if disseminated, creates a risk, even without a data-rich detailed specification.

For example, the idea of using a fission reaction to create a bomb, or the idea of culturing bacteria in a growth medium with an antibiotic gradient to evolve antibiotic resistance, may be all the guidance a suitably prepared developer requires; the details can be figured out.

[...] Attention hazard: mere drawing of attention to some particularly potent or relevant ideas or data increases risk, even when these ideas or data are already “known”.

Because there are countless avenues for doing harm, an adversary faces a vast search task in finding out which avenue is most likely to achieve his goals. Drawing the adversary’s attention to a subset of especially potent avenues can greatly facilitate the search. For example, if we focus our concern and our discourse on the challenge of defending against viral attacks, this may signal to an adversary that viral weapons—as distinct from, say, conventional explosives or chemical weapons—constitute an especially promising domain in which to search for destructive applications.

These and other examples highlight just how large the negative impacts of true information can sometimes be - large enough to increase global catastrophic risks [EA(p) · GW(p)], or perhaps even existential risks [EA · GW]. It is worth further highlighting two underlying reasons why information could often have such large, negative impacts:

Altogether, we believe that, in some situations (e.g., Bostrom’s examples), developing[1] or sharing information could have an expected negative impact that is larger than the expected positive impact the developer/sharer will achieve through everything else they do in their lives. And we believe that information hazards that are simply very large (rather than so large that they overwhelm the rest of one’s impact) will be much more common.

Thus, at least for some people, it seems like an important way to make their impact more positive would be to reduce the chances that they develop or share hazardous information. This could be just as important as more typical ways to “have a positive impact”.[2]

But it is obviously also true that developing and sharing information is often very beneficial, and that constantly worrying about information hazards would be counterproductive. Thus, in this post we will offer:

Should you care about information hazards?

But who is this relevant to? More specifically, for whom is this topic relevant enough that it’s worth them spending time learning and thinking about it? We think that only a small proportion of people will develop information that poses catastrophic or existential risks. However:

Ultimately, we’d say that, as a rough rule of thumb, this topic is relevant enough that it’s worth spending time learning and thinking about it for people who research advanced technologies and/or catastrophic risks, or who often think about such technologies and risks. We think that such people have non-negligible odds of, at some point, developing or learning of information that poses substantial risks.[3]

When should you think about information hazards?

We propose a simple heuristic to answer this question:

We will now explain the terms and ideas in that heuristic in more detail.

Some information will have high potency and high counterfactual rarity. This could include, for example, information about a new way to engineer a virus. These are the cases in which it’s worth thinking about how hazardous the information might be.

Additionally, in such cases, you should probably consider using information-related responses. By this we mean actions intended to prevent the development or (further) spread of potentially hazardous information, or to influence how the information is developed or (further) spread. For example, you might avoid conducting a line of research that could reveal a new way to engineer a virus, or push for research of that type to require review before it's conducted, or discourage discussion of such research outside of academic publications. (Note that our purpose here is to illustrate these ideas, rather than to recommend specific actions in response to specific, actual situations.)[5] 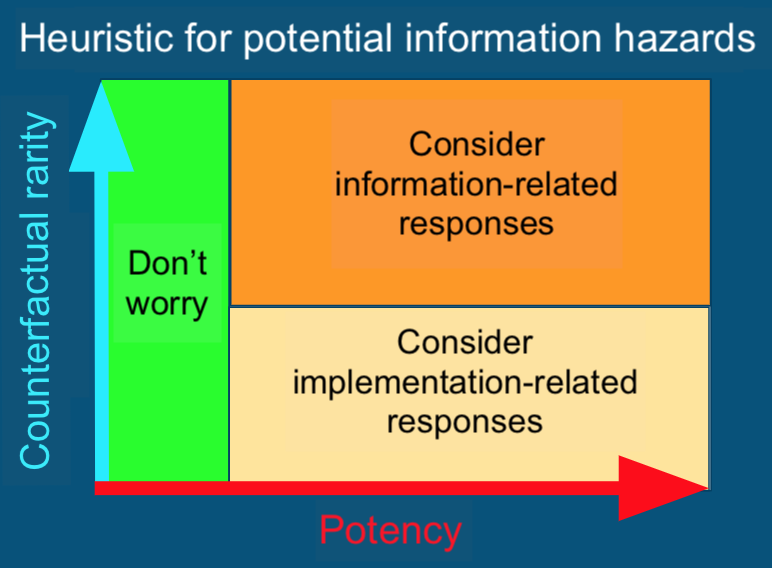 Note that both this heuristic and the response options we discuss below are intended for use at an individual level, to reduce information hazards from one’s own actions. We think that many of the same ideas would apply at an organisational level, or if trying to analyse and reduce the information hazards other people’s actions might cause, but that some modifications would have to be made.[6]

For information with good consequences

Although it's not our focus, we should also quickly note that essentially the mirror image of this heuristic process can be followed in relation to information you suspect may have good consequences.

What can you do about information hazards?

Let’s say you’ve used the above heuristic, and determined that the information in question is indeed high in potency and counterfactually rarity. You know this means that you should probably think further about how hazardous this information might be, and consider using “information-related responses”. But what specific responses can you employ?

We will now provide a (non-exhaustive) list of responses that may often be worth considering when dealing with potential information hazards, along with examples to illustrate each response. Note that it would sometimes be possible to combine multiple responses (i.e., they are not mutually exclusive).

These responses are very approximately ordered from the least extreme responses, worth considering when the expected harms from developing or sharing the information are relatively low, to the most extreme responses. (But we should note that, for the most part, this post won’t offer very specific guidelines on which response to take in particular situations, or how to decide that. We hope to explore those questions more in future work.)

Develop the information, but don’t (yet) share it: Similar to the above, except that you only proceed with developing the information, concluding that sharing it is not worthwhile, or that it’d be better to wait until later to decide whether to share it.

Think more about the risks: Consider in more detail how risky the information might be. You might do this while continuing to develop and/or share the information, or before doing so (with the results of your thinking determining whether to do so).

Decrease the likelihood of others developing and/or sharing the information: This overlaps with parts of the above response option. But there are also ways of doing this that don’t involve monitoring whether others may develop and/or share the information. For example, you could delete your own research notes, or try to steer people away from books, articles, concepts, etc. that helped lead you to the information.

Improve the groups that might discover or use the information: Try to improve the values (e.g., level of altruism) and/or capabilities of the people or organisations who might develop, learn about, or implement the information. This would be done to reduce the risks that they will share or use the information in harmful ways. (See also Improving the future by influencing actors' benevolence, intelligence, and power [EA · GW].)

Again, we emphasise that this list is probably not exhaustive, that some of the response options could be used in combination, and that we aren’t here making specific suggestions on when to use which response. Note also that one may often be able to switch from one response option to another later (e.g., from sharing with a subset of people to sharing publicly), especially if one has started with a relatively cautious option.

We believe that many people have a significant chance of at some point being in a position to develop and/or share information that could cause substantial harm. We think that this is especially true for people who research advanced technologies and/or catastrophic risks, or who often think about such technologies and risks. Thus, we think that responding well to potential information hazards can be a very important way for such people to have a more positive impact on the world.

We then outlined a set of information-related responses one could consider, which we hope will guide readers in making more informed choices when facing potential information hazards.

There are two key things that this post has not done:

We hope to explore those avenues further in future work.

This post was written for Convergence by MichaelA and Justin Shovelain [LW · GW], based on an earlier post written by Justin and Andrés Gómez Emilsson. We’re also grateful to David Kristoffersson [LW · GW], Aaron Gertler, and Will Bradshaw for helpful comments and edits on earlier drafts, and to Anders Sandberg and Ben Harack for helpful discussions on the general topic.