Yesterday I stumbled on the Assize of Bread, which set the price of bread in England by the price of wheat with rules like:

When a quarter of wheat is sold for 18d., then wastel bread of a farthing white and well-baked shall weigh £4 10s. 8d.

A 'quarter' here means eight bushels, or a quarter of a ton. This is a large amount of wheat, which makes sense since it's the baker buying. 'Wastel' bread meant good-quality white bread, and a 'farthing' is a quarter of a penny. In the British tradition of using confusingly similar terms for weight and currency, '£4 10s 8d' is a weight. With 20 pennies (d) to the shilling and 12 shillings (s) to the pound (£), that's 4.53 Tower pounds, which would be 3.49 lb (international avoirdupois pound, as used in the US).

I had thought the standard bread would be something cheaper than white bread, and this does look like the case later, but here cheaper breads are all given with prices relative to white bread (Ross 1956): 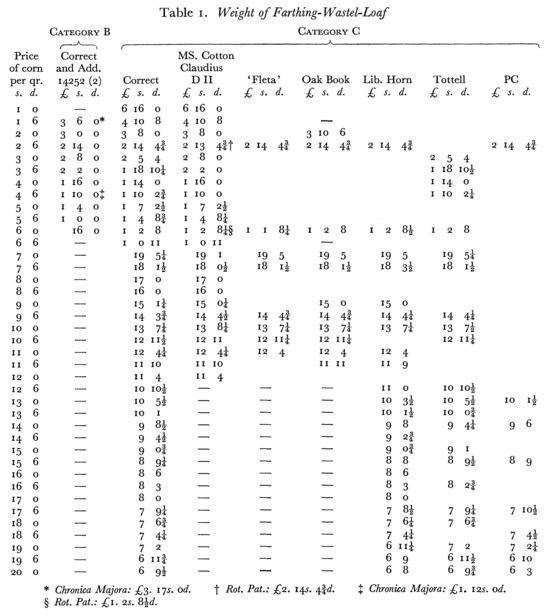 Each row is a wheat price (in shillings and pence per quarter ton) and the columns are for different sources. For example, if a quarter ton of wheat cost six shillings, most sources would give a £1 2s 8d (£1.2) weight for a farthing (quarter penny) loaf.

We can also convert this into modern prices. The commodity price of wheat today is $5/bushel ($40/quarter) and I'm going to assume the bushel hasn't changed size much. The table says that if a quarter of wheat costs six shillings, then a farthing gets you a 1.2 Tower pound (15oz avoirdupois) loaf. Six shillings is 480 farthings, so a $40 quarter gives a $0.08 15oz loaf, or $0.1/lb. Cheap white bread in the grocery store today is about ten times the cost. I expect this mostly comes from us seeing greater efficiency increases in grain production than in bread production?

It's interesting that they chose to fix the price of the loaf at a farthing instead of fixing the weight at a pound and letting the price vary. The farthing was the smallest coin at a time when metal was expensive, however, and it's easier to change the size of loaves than mint tiny coins. This made the math hard, since while a loaf price would be directly proportional to the wheat price the loaf size is inversely proportional. Not surprisingly, when doing division by hand with £/s/f/ob/q units, there are quite a few errors in the tables.

Over time people started standardizing the weight instead of the price. Here are some extracts from Jackson's Oxford Journal, via The Victoria History of the County of Oxford: 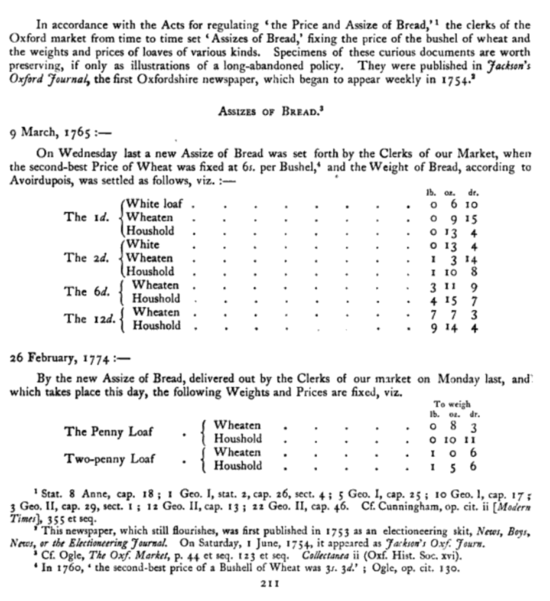 You can see there's been some inflation: the price of wheat is given per bushel instead of quarter ton (x8) and the smallest loaf is a penny instead of a farthing (x4). The first version of the Assize dates from ~1200 (Ross 1956) and this is 1765, ~565 years later, however, so it's not much inflation considering the amount of time.

They've also switched from tower weights to avoirdupois, so weight is given in the modern pounds, ounces (x16), and drams (x16). Under the traditional ratios a six shilling bushel would give a two penny loaf of £1 2s 8d, which would be 14oz 13dr avoirdupois, while they give 13oz 4dr. That's about 10% smaller, but might be due to changes in the size of the bushel?

They're also not listing the prices of white loaves larger than 13oz, and instead list only 'wheaten' (whole wheat) and household (even higher bran content). I'm not sure why; maybe people were a bit poorer?

This is also an example, with the heavier loaves, of picking a weight and determining a price instead of the other way around. They list prices for the Peck Loaf (17lb 6oz), Half-peck Loaf (8lb 11oz), and Quartern Loaf (4lb 5oz 8dr). The Quartern costs 16.25x the minimum currency increment of a farthing, so it looks to me like prices now have the sufficient resolution when using coins to support holding the size constant.

Also note, though, how heavy these loaves are! The Peck Loaf is absolutely enormous, and the others are still not small. How do you evenly bake something so large? You could make it ridiculously long, but I doubt they did. Old recipes are not especially clear, but The Housekeeper's Domestic Library; Or, New Universal Family Instructor In Practical Economy (1805) says:

My read of "mould it into loaves or batch two pieces together" is that you could either make loaves or leave it all together ("boule"?), and that if you did the latter you could bake two one-peck loaves in the oven at once? When it says "a middling sized loaf will require an hour and a half in baking" in a "brisk oven" (cooking.stackechange guesses 200C / 400F) that's quite a long time, and perhaps a full peck would be more like two hours?

I found another recipe in A Modern System of Domestic Cookery, Or The Housekeeper's Guide (1822) which says: 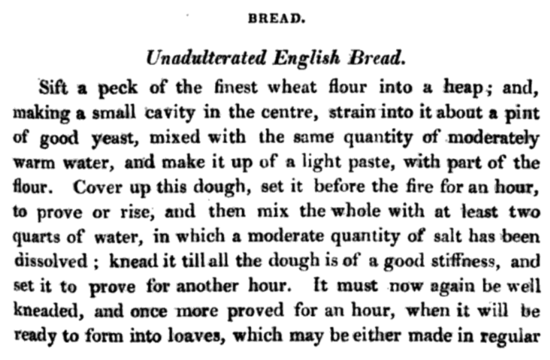 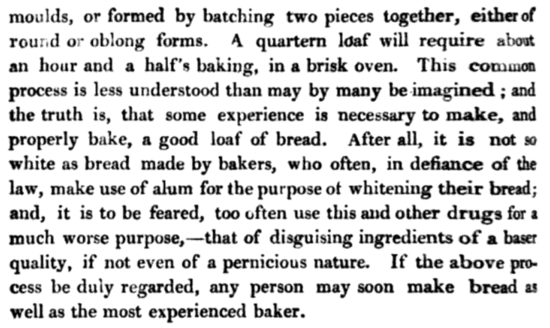 This gives a bit more detail, though not much: "round or oblong forms", "a quartern loaf [~4lb] will require about an hour and a half'd baking in a brisk oven".

They're also keen on home baking as a way to avoid the baker using alum for artificially whitening bread.

In all municipal boroughs, except Oxford and Cambridge, the Assize of Bread was set by the Mayor. ... But in Oxford this business was gradually taken out of the hands of the civic and transferred to the University authorities. ... That a power, which in other cities was exercised by the Mayor, should in Oxford be exercised by the University authorities was always a grievance, and during the period under review complaint was made that the University authorities exercised their power in a very opperssive manner, as was shown by the fact that on 7th November, 1801, they reckoned the average price of a bushel of wheat in the Oxford market as being 7s. 9d., whearas in reality it was 8s. 4 3/4d., thus causing the baker a loss of 3s. 4d. on every sack of flour used by him.

By this point the price of wheat was allowed to float but the price of bread was still fixed to that of wheat by the Assize. The University wanted cheap bread, so it claimed the market price for wheat was ~10% lower than it actually was, forcing bakers to work more cheaply.

as evidence that this accusation was not entirely unfounded, it may be noted that the price of household bread in the city of Oxford was often 2d. or 3d. a peck less than that fixed by the Justices of the Hundred of Wootton, which adjoins the city on the north.

They're quoting prices per a fixed size, instead of saying that the loaves in Wootton were larger for the same cost. The bread they're using for their comparision is a peck of household bread, which shows matches the pattern of focus shifting from white (wastel) to household (with bran).

The Oxford Journal for 4th May, 1801, reports that "On Monday last, two person being convicted for selling hot bread, the penalty was laid out in bread and distributed to the poor of the parishes of St. Mary the Virgin and St. Peter-in-the-East, where the persons resided.

What's wrong with selling "hot bread"? It's so much better that way!

in contravention of 40 Geo. III, c. 18, forbidding the sale of bread within twenty-four hours of its being baked.

Why would you require bread be sold day-old? The wheat harvest of 1799 was about half the usual size and the next year's was about three quarters (Neumann and Kington, 1992), and the government was trying to reduce bread consumption. They had tried requiring all bread to be whole wheat (Making of Bread Act, 1800) but this was unpopular enough that they needed to repeal it. The Sale of Bread Act, 1800 banned fresh bread for a year: 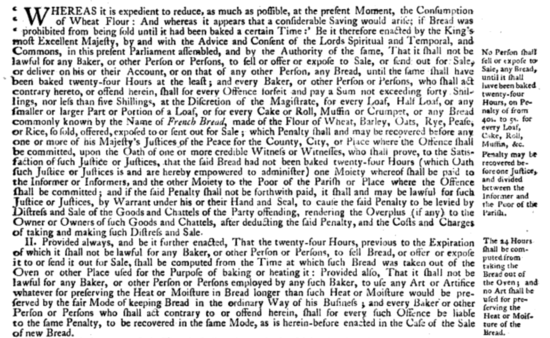 Whereas it is expedient to reduce, as much as possible, at the present Moment, the Consumption of Wheat Flour: And whereas it appears that a considerable Savings would arise if bread was prohibited from being sold until it had been baked a certain time: Be it therefore enacted ... That it shall not be lawful for any Baker, or other Person or Persons, to sell of offer or expose to Sale or send out for Sale or deliver on on his or their Account, or on that of any other Person, any Bread, until the same shall have been baked twenty-four Hours at the least;

Fresh bread is too tasty, and people would eat less bread if it weren't allowed. Later it prohibits using "any Art or Artifice whatever for preserving the Heat or Moisture in Bread longer than such Heat or Moisture would be preserved by the fair Mode of keeping bread in the ordinary way of his Business", just to make sure.

In 1917, during WWI, the United Kingdom (Monthly Review of the US Bureau of Labor Statistics, Volume 4, Issue 6) again banned fresh bread. This time the requirement was 12hr, but in practice it was often longer.

One question I had was, why not use prices? While regulations that reduce the tastiness of food mean people will enjoy their food less, they also have some effect of distributing food to people who need it more. With higher prices some people will not be able to afford the bread and will starve, while with lower prices and lower tastiness consumption goes down among people with other options. The whole wheat requirement seems like it does this better than requiring bread to be old, but apparently people wouldn't stand for it?

Overall, I was surprised how regulated the pricing and sale of bread was, going back ~800+ years. I think I hadn't realized how much baking was done outside the home, and how worried people were about bakers exploiting their position.