I'm going to help you quit Facebook with some science

I was a serial Facebook addict. I used to spend 2+ hours a day on Facebook, most days. Until I worked out how to change my mind.

Let's talk about the news feed. We all have this feeling that the news feed is drivel. Even curated, mine was still full of crud. Even super curated it was dull at best. Eventually I realised, something had to give.

As with many conflicts, indecision feels uncomfortable. Personally, I was super uncomfortable sitting in the cognitive dissonance of two conflicting beliefs:

There are three possible ways this can go. Either Facebook is in fact drivel and I will be happy to avoid it at any cost. Or Facebook has good in it and I'm staying around for the good stuff because I know it's worth it. Or Facebook is sometimes bad and sometimes good in some other complicated fashion, and I should check Facebook in some complicated intermittent fashion because of that...

This is how I worked out which belief was right.

Basic premise: Facebook has some good content and some bad content. But how much of each is ideal, acceptable or tolerable? Think about the possible ratios and write down your pre-commitment. What ratios do you consider ideal, acceptable, and unacceptable? Don't worry about getting it perfect; you're an adult who can change their mind at any time. The purpose of writing down a ratio is to establish a baseline expectation before testing. I'm not coming to sneak up behind you and see your piece of paper and judge you if you change your mind. It’s fun to try set a belief and then test it. This is doing science.

Once you've decided your ideal, acceptable and unacceptable ratios, write down another number. What do you think the actual ratio is? Try to be honest. No one is looking.

Next, draw this table on your page:

Now comes the part that takes the time. I want you to go down your news feed and I want you to count if you think posts are good or bad. There's also the "maybe" list for if you can't decide. Be honest with yourself. Try not to count posts a particular way. Try not to push the result somewhere. As a scientist, be curious about what it's going to be. No need to bias the results. It won't work as an exercise if you lie to yourself. It's also unnecessary to lie.

What's good and what's bad? I don't know. It’s subjective anyway. I can't tell you how to do that. You might want to think about: 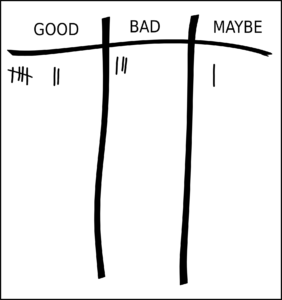 And keep going. You can go to 100 posts, you can go for 5 minutes, go till you get bored. Up to you how you decide when to stop. With a warning: If you don't pre-determine the stopping rule you can bias the numbers a little. What if post 101 is a good one, you might stop at 101 not 100. That means you swayed everything a little more good on the ratios than you would otherwise have measured.

Then what? Count the columns. Then? Do nothing. It's just a ratio. We measured, but we don't have to do anything different.

How does this work? What happened? What did you do to me?

I say do nothing. But I am confident that you are going to allocate less time to Facebook than previously. Just naturally end up on there less often.

The trouble with feelings is that they are based in System 1. I have a hunch that Facebook is boring. But I don't always naturally know what to do with that hunch. The task above takes the feeling and brings that into System 2. We can count and measure the exact quantity of the feeling. Then maybe we can be better informed to act. And act you can.

Depending on what you uncover, you can choose what to do next. You now know exactly how good or bad your news feed was today. Take this information and choose to look at Facebook less, or choose to look at Facebook more. Maybe it's where you find all the good ideas! And any time you like - retest. See how your intuition for the site, mismatches or matches to reality.

If I hit the "like" button, Facebook tries it's valiant and hardest to show me more of that same thing. That means if it's pictures, Facebook will deliver slightly more pictures. If it's from a group, posts from that group. If it's from a friend, I'd be hearing more from that friend over the next week. I kind of stopped hitting the like buttons. Facebook doesn't need to know my likes. I also hate like notifications so much that I got a browser add-on that hides them from view and notification.

Now I wasn't hitting the like button so much. But I would still comment occasionally. I would watch flame wars as they happened. And I started getting interested in arguments. I tried to work out where they started. It seemed that they always started earlier than I expected. Well before a flame war, people are getting aggravated. But while that was interesting to learn, I wasn't commenting - I didn't want to interrupt the arguments that I was seeing, I was trying to be an objective observer. When I would make the occasional comment, same as likes, Facebook would deliver content that was similar to my future browsing.

if you are curious how the news feed will change, you can follow me in stopping likes and commenting. Try it. Also try other experiments. Science is fun!

Meta: I did this 6+ months ago and the results stuck. I spend a lot less time on Facebook than I used to. But the amazing thing is that the effect was almost overnight. It was obvious. My ratio was worse than 1:20. That was unacceptable to me.

When you try this, make sure you put down some predictions. Part of the scientific method is to make predictions and then test those predictions. In the process of modelling the world, predicting the future and generally being awesome, it’s okay to be wrong, it’s okay to be right - that’s why we test. It’s not okay to fake the results and lie to yourself. Wouldn’t it be something if you were surprised. Or confused. Or you changed your mind in response to the evidence you found.

Facebook and social media are becoming an entrenched part of our lives. Hopefully you ask the question about who's in control. Facebook is out to get you after all.