Inverse cryonics: one weird trick to persuade anyone to sign up for cryonics today!

OK, slight disclaimer, this is a bit of a joke article inspired by me watching a few recent videos and news reports about cryonics. Nevertheless, there is a serious side to it.

Many people claim that it is irrational to sign up for cryonics, and getting into the nitty gritty with them about how likely it is to work seems to turn into a series of small skirmishes with no particular "win condition". Opponents will not say,

"OK, I will value my life at $X and if you can convince me that (cryonics success probability)*$X is greater than the $1/day fee, I will concede the argument".

Rather, they will retreat to a series of ever harder to falsify positions, usually ending up at a position which is so vague that it is basically pure mood affiliation and acts as a way to stop the conversation rather than as a true objection. I have seen it many times with friends.

So, I propose that before you debate someone about cryonics, you should first try to sign then up for inverse cryonics. Inverse cryonics is a very simple procedure, fully scientifically tested that anyone can sign up for today, as long as they have a reasonably well-off benefactor to take the "other side" of the bet. Let me explain.

The inverse cryonics patient takes a simple revolver with 6 barrels, with one bullet loaded and spins the barrel on the gun, then shoots themselves once in the head1. If the inverse cryonaut is unlucky enough to shoot themselves with a barrel containing a real bullet, they will blow their brains out and die instantly and permanently. However, if they are lucky, the benefactor must pay them $1 per day for the rest of their lives.

As a baseline, cryonics seems to cost ~$1/day for the rest of your life in order to avoid a ~1/10 chance of dying2. Most people3 would not play ~10-barrel Russian Roulette for a $1/day stipend, even with delayed death or an instant ~$50k payout.

Of course, I'm sure opponents of cryonics won't bite this particular bullet, but at the very least it may provide an extra intuition pump to move people away from objecting to cryonics because it's the "risky" option. 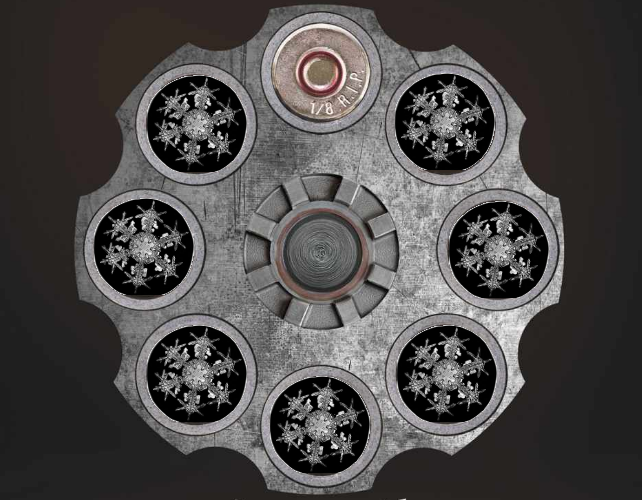 1. Depending on the specific deal, more than six barrels could be used, or several identical guns could be used where only one barrel from one gun contains a real bullet, allowing one to achieve a reasonable range of probabilities for "losing" at inverse cryonics from 1 in 6 to perhaps one in 60 with ten guns.

2. And pushing the probability of cryonics working down much further seems to be very hard to defend scientifically, not that people haven't tried. It becomes especially hard when you assume that the cryonics organizations stick around for ~40 years, and society sticks around without major disruptions in order for a young potential cryonaut who signs up today to actually pay their life insurance fees every day until they die.

3. Most intelligent, sane, relatively well-off people in the developed world, i.e. the kind of people who reject cryonics.

4. And you believe that the life you miss out on in the future will be as good, or better than, the life you are about to live from today until your natural death at a fixed age of, say, 75.