Why officers vs. enlisted?

It's always puzzled me that, in armies, officers form a separate hierarchical ladder from the NCOs and enlisted soldiers.

Armies could have a single hierarchy, top to bottom, as in the simplified diagram below on the left. Instead, all armies have two distinct ladders, with one strictly above the other, as on the right.  (Reminds me of those wacky non-standard integers.) 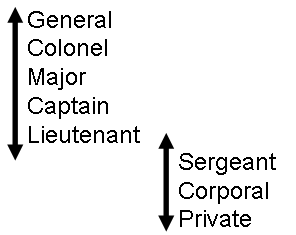 The usual answers are obvious but irrelevant: Yes, some people shoot straight to a position high on the ladder. You could do that with either model. Yes, even when those lower down on the ladder have more experience and wisdom, it can make practical sense to have a hierarchy. Yes, the higher someone is, the higher the level of the decisions they make. You could likewise do these on a one-ladder model.

It's said that officers "decide," while non-officers "just carry out  orders"; or that officers choose strategy, and non-officers do tactics. But everyone makes decisions, on their own level. A private makes decisions for himself, a corporal for three soldiers, and a colonel for a thousand, each one in the context of their orders from above. One soldier's strategy is his superior's tactics. And the distinction is not based on command: New army doctors automatically become officers, even if they don't command anyone. Doctors are non-combatants, but fighter pilots are combatants par excellence, don't command anyone, and are all officers.

These answers don't explain why there need to be two ladders. I asked at Quora without a convincing answer. Historically, the distinction was based on social classes, but that doesn't explain why every army follows this arrangement, including those in very different societies.

Similarly: What's a corporate executive? (I'm talking about large companies here; small companies and startups are different.) I understand that there is a management hierarchy, but why the arbitrary distinction between a senior manager and a junior executive? Aren't those just two rungs on the ladder? In corporate-speak, an executive is called a "decision maker." What a strange term! Isn't a manager or even a lowly "individual contributor" also a decision maker -- at the scope that their own managers allow? (I should add that the two-ladder system is not as developed in business as it is in the army  or in medicine. There is no career ladder for non-execs that extends arbitrarily high, though always below the execs.)

Not all professions work that way. Actuaries have ten levels, based on passing a sequence of exams. And though some areas of engineering distinguish an engineer from a technician, software engineering has no such dichotomy: Some software engineers make more money, and some make broader decisions or manage others, but there is no two-way split.

In medicine, on the other hand, there is a clear distinction between doctors and nurses. There are different status levels among doctors and among nurses, but a PhD in nursing stands on the other side of a clear border from a beginning MD. Similarly with lawyers and paralegals. These dichotomies stem from licensing restrictions, which in turn are descended from medieval guild practices. But why does it have to be this way? Why not just rank medical personnel, or legal personnel, in a single continuum from practical nurse through rockstar brain surgeon. (Is that a title?). There would still be the understanding that some people will never climb beyond a certain point, while others can jump straight to a higher rung.

The answer lies in LessWrong's concept of "agentiness": Making "choices so as to maximize the fulfillment of explicit desires, given explicit beliefs." Less abstractly, it is sometimes described as "reliability and responsibility." Agenty types get to be called "Player Characters" or heroes. ("Agenty" and "agentiness" are made-up words, and the standard terminology is "agent" and "agency.")  I think "agenty" was made up to point out that while all humans are agents to some extent, some do it far better than others.)

Is agentiness a natural kind, a cluster in thingspace, a joint-carving concept? Might agentiness just be a mix of features that occur to varying degrees in various contexts?

We might say that agentiness is a continuum: Everyone has some, but some people have more than others. Lower-downs sometimes have goals, and higher-ups often act like cogs. Moreover, the agentiness of officers and executives is strictly in the context of their superiors' goals: They may be agenty, but not for their individual goals. It would be more accurate to say that in their roles they are meant to be agenty, on behalf of the organization.

Some people are non-agenty in some of their social roles and agenty in others. For example, I know workers who readily admit to being lowly cogs in a machine, but who have tremendous achievements in setting up and leading non-profits outside work hours. Some hard-driving workaholics are milquetoasts at home. Some caring, wise, foresightful parents are limp rags at work.

But agentiness is a real concept, at least so far as the officers and executives go. Their roles are implicitly defined by agentiness. Armies and corporations decide which people have it (or at least are meant to). These organizations agree with LessWrong that agentiness is a natural kind.