The correct response to uncertainty is *not* half-speed

Related to: Half-assing it with everything you've got; Wasted motion; Say it Loud.

Once upon a time (true story), I was on my way to a hotel in a new city.  I knew the hotel was many miles down this long, branchless road.  So I drove for a long while.

After a while, I began to worry I had passed the hotel.

So, instead of proceeding at 60 miles per hour the way I had been, I continued in the same direction for several more minutes at 30 miles per hour, wondering if I should keep going or turn around.

After a while, I realized: I was being silly!  If the hotel was ahead of me, I'd get there fastest if I kept going 60mph.  And if the hotel was behind me, I'd get there fastest by heading at 60 miles per hour in the other direction.  And if I wasn't going to turn around yet -- if my best bet given the uncertainty was to check N more miles of highway first, before I turned around -- then, again, I'd get there fastest by choosing a value of N, speeding along at 60 miles per hour until my odometer said I'd gone N miles, and then turning around and heading at 60 miles per hour in the opposite direction.
Either way, fullspeed was best.  My mind had been naively averaging two courses of action -- the thought was something like: "maybe I should go forward, and maybe I should go backward.  So, since I'm uncertain, I should go forward at half-speed!"  But averages don't actually work that way.[1]
Following this, I started noticing lots of hotels in my life (and, perhaps less tactfully, in my friends' lives).  For example:
That is, it seems to me that often there are two different actions that would make sense under two different models, and we are uncertain which model is true... and so we find ourselves taking an intermediate of half-speed action... even when that action makes no sense under any probabilistic mixture of the two models. 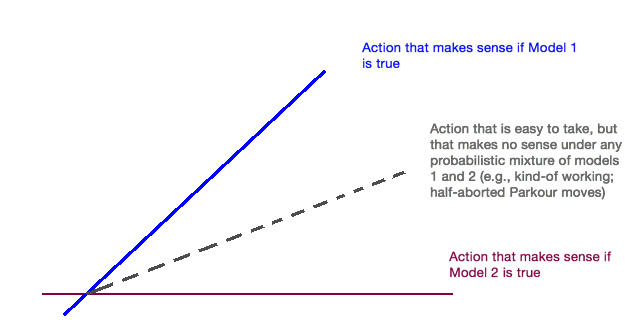 You might try looking out for such examples in your life.
[1] Edited to add: The hotel example has received much nitpicking in the comments.  But: (A) the actual example was legit, I think.  Yes, stopping to think has some legitimacy, but driving slowly for a long time because uncertain does not optimize for thinking.  Similarly, it may make sense to drive slowly to stare at the buildings in some contexts... but I was on a very long empty country road, with no buildings anywhere (true historical fact), and also I was not squinting carefully at the scenery.  The thing I needed to do was to execute an efficient search pattern, with a threshold for a future time at which to switch from full-speed in some direction to full-speed in the other.  Also: (B) consider some of the other examples; "kind of working", "kind of hanging out with my friend", etc. seem to be common behaviors that are mostly not all that useful in the usual case.