Someone is broadcasting a stream of bits. You don't know why. A 500-bit-long sample looks like this:

The thought occurs to you to do Science to it—to ponder if there's some way you could better predict [LW · GW] what bits are going to come next. At first you think you can't—it's just a bunch of random bits. You can't predict it, because that's what random means.

Or does it? True, if the sequence represented flips of a fair coin—every flip independently landing either 0 or 1 with exactly equal probability—then there would be no way you could predict what would come next: any continuation you could posit would be exactly as probable as any other.

But if the sequence represented flips of a biased coin—if, say, 1 came up 0.55 of the time instead of exactly 0.5—then it would be possible to predict better or worse. Your best bet for the next bit in isolation would always be 1 [LW · GW], and you would more strongly anticipate sequences with slightly more 1s than 0s.

... that is, if it's even a coin. You love talking in terms of shiny, if hypothetical, "coins" rather than stodgy old "independent and identically distributed binary-valued random variables", but looking at the sample again, you begin to further doubt whether the bits are independent of each other. You've heard that humans are biased [LW · GW] to overestimate the frequency of alternations (101010...) and underestimate the frequency of consecutive runs (00000... or 11111...) in "truly" (uniformly) random data, but the 500-bit sample contains a run of 13 0s (starting at position 243) and a run of 19 1s (starting at position 319). You're not immediately sure how to calculate the probability of that, but your gut says that should be very unlikely given the biased-coin model, even after taking into account that human guts aren't very good at estimating these things.

Maybe not everything in the universe is a coin. What if the bits were being generated by a Markov chain—if the probability of the next bit depended on the value of the one just before? If a 0 made the next bit more likely to be a 0, and the same for 1, that would make the 00000... and 11111... runs less improbable.

So maybe it's all just a coincidence: the broadcast is random—whatever that means—and you're just apophenically pattern-matching on noise. Unless ...

Could it be that some things in the universe are neither coins nor Markov chains? You don't know who is broadcasting these bits or why; you called it "random" because you didn't see [LW · GW] any obvious pattern, but now that you think about it, it would be pretty weird for someone to just be broadcasting random bits. Probably the broadcast is something like a movie or a stock ticker; if a close-up sample of the individual bits looks "random", that's only because you don't know the codec.

Trying to guess a video codec is obviously impossible [LW · GW]. Does that kill all hope of being able to better predict future bits? Maybe not. Even if you don't know what the broadcast is really for, there might be some nontrivial local structure to it, where bits are statistically related to the bits nearby, like how a dumb encoding of a video might have consecutive runs of the same bit-pattern where a large portion of a frame is the same color, like the sky.

Local structure, where bits are statistically related to the bits nearby ... kind of like a Markov chain, except in a Markov chain the probability of the next state only depends on the one immediately before, which is a pretty narrow notion of "nearby." To broaden that, you could imagine the bits are being generated by a higher-order Markov chain, where the probability of the next bit depends on the previous n bits for some specific value of n. 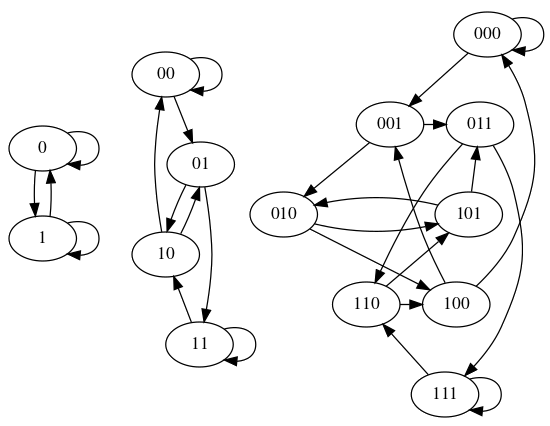 Everything in the universe is a Markov chain!—with respect to the models you've considered so far.

"The bits are being generated by a Markov chain of some order" is a theory, but a pretty broad one. To make it concrete enough to test, you need to posit some specific order n, and, given n, specific parameters for the next-bit-given-previous-n probabilities.

Enough! You get it! The n-th order Markov chain has 2n parameters!

Okay, but then how do you guess the parameters?

For the n = 0 coin, your best guess at the frequency-of-0 parameter is going to just be the frequency of 0s you've observed. Your best guess could easily be wrong, and probably is: just because you observed 235/500 = 0.47 0s, doesn't mean the parameter is 0.47: it's probably somewhat lower or higher, and your sample got more or fewer 0s than average just by chance. But positing that the observed frequency is the actual parameter is the maximum likelihood estimate—the single value that most makes the data "look normal" [LW · GW].

For n ≥ 1, it's the same idea: your best guess for the frequency-of-0-after-0 parameter is just the frequency of 0 being the next bit, among all the places where 0 was the last bit, and so on.

You can write a program that takes the data and a degree n, and computes the maximum-likelihood estimate for the n-th order Markov chain that might have produced that data. Just slide an (n+1)-bit "window" over the data, and keep a tally of the frequencies of the "plus-one" last bit, for each of the 2n possible n-bit patterns.

In the Rust programming language, that looks like following. (Where the representation of our final theory is output as a map (HashMap) from n+1-bit-patterns to frequencies/parameter-values (stored as a thirty-two bit floating-point number, f32).)

Uh. The tiny probability makes sense: there's a lot of randomness in 500 flips of a biased coin. Even if you know the bias, the probability of any particular 500-flip sequence is going to be tiny. But a number that tiny is kind of unwieldy to work with. You'd almost rather just count the zeros and ignore the specific digits afterwards.

But counting the zeros is just taking the logarithm—well, the negative logarithm in the case of zeros after the decimal point. Better make the log base-two—it's thematic. Call this measurement the log loss.

Now you can compare different theories to see which order of Markov chain is the best theory to "fit" your 500-bit sample ... right?

In retrospect, the problem should have been obvious from the start. Using your sample data to choose maximum-likelihood parameters, and then using the model with those parameters to "predict" the same data puts you in the position of the vaunted "sharpshooter" who paints a target around a clump of bullet holes after firing wildly at the broad side of a barn.

The broadcast is ongoing; you're not limited to the particular 500-bit sample you've been playing with. If the worry were just that the higher-order models will (somehow, you intuit) fail to predict future data, you could use different samples for estimating parameters and validating the resulting models, but you think you're suffering from some more fundamental confusion—one that's probably not limited to Markov chains in particular.

Your working concept of what it means for a theory to "fit" the data, is for it to maximize the probability with which the theory predicts the data. This is an objective, quantitative measurement. (Okay, the log loss is taking the negative logarithm of that to avoid so many zeros after the decimal point, but minimizing the log loss and maximizing the probability are both expressing the same preference on theories.)

Well ... in the limit, you could choose a theory that assigns Probability One [LW · GW] to the observed data. The "too many zeros"/"avoid working with really tiny numbers" justification for taking the negative log doesn't really apply here, but for consistency with your earlier results, you dutifully note that the logarithm of 1 is 0 ...

But maybe "too many zeros" isn't the only good motivation for taking the logarithm? Intelligence is prediction is compression. [LW · GW] The log loss of a model against the data can be interpreted as the expected number of bits you would need to describe the data, given the optimal code [LW · GW] implied by your model.

In order to communicate a reduction in your uncertainty, you need to send a signal [LW · GW]—something you can choose to vary in response to the reality of the data. A signal you can vary to take two possible states, can distinguish between two sets among which you've divided the remaining possibilities; writing down a bit means halving your uncertainty.

On this interpretation, what the logarithm of Probability One being zero means is that if your theory predicted the exact outcome with certainty, then once you stated the theory, you wouldn't have to say anything more in order to describe the data—you would just know with zero further bits.

Once you stated the theory. A theory implies an optimally efficient coding by which further bits can whittle down the space of possibilities to the data that actually happened. More complicated or unlikely data requires more bits just to specify—to single out that one outcome amongst the vastness of equally remote alternatives. But the same thing goes for theories [LW · GW].

Given a particular precision to which parameters are specified, there are exponentially more Markov chains of higher degrees, which can continue to drive down the log loss—but not faster than their own probability decreases. You need exponentially more data just to learn the parameters of a higher-order model. If you don't have that much data [LW · GW]—enough to pin down the 2n parameters that single out this particular higher-order Markov chain amongst the vastness of equally remote alternatives—then your maximum-likelihood best guess is not going to be very good on future data, for the same reason you can't expect to correctly guess [LW · GW] that a biased coin has a probability of landing Heads of exactly 0.23 if you've only seen it flipped twice.

If you do have enough data to learn a more complex model, but the data was actually generated by a simpler model, then the parameters of the complex model will approximately take the settings that produce the same behavior as the simpler model—like a second-order Markov chain for which the bit-following-01 parameter happens to take the same value as the bit-following-11 parameter. And if you're deciding what theory to prefer based on both fit and complexity, the more complex model won't be able to "pay" for its increased complexity [LW · GW] with its own predictions.

Now that you know what's going on, you can modify your code to penalize [LW · GW] more complex models. Since the parameters in your implementation are 32-bit floats, you assign a complexity cost of 32⋅2n bits to n-th order Markov chains, and look at the sum of fit (log loss) and complexity. Trying out your code again on a larger sample of 10,000 bits from the broadcast—

—reveals a clear preference for the third-order theory (that for which the fit-plus-complexity score is the lowest), allowing you to enjoy the huge 450-plus–bit leap in compression/prediction from n := 2 to 3 and logically stop there, the steepness of the ascent into the madness of arbitrary complexity successfully dissuading you from chasing after diminishing returns (which you suspect are only hallucinatory). That's the power packed by parsimony—the sublime simplicity of Science.