Welcome. This week we discuss the fifteenth section in the reading guide: Oracles, genies, and sovereigns. This corresponds to the first part of Chapter ten.

Reading: “Oracles” and “Genies and Sovereigns” from Chapter 10

An old response to suggestions of oracle AI, from Eliezer Yudkowsky (I don't know how closely this matches his current view):

When someone reinvents the Oracle AI, the most common opening remark runs like this:

To which the reply is that the AI needs goals in order to decide how to think: that is, the AI has to act as a powerful optimization process in order to plan its acquisition of knowledge, effectively distill sensory information, pluck "answers" to particular questions out of the space of all possible responses, and of course, to improve its own source code up to the level where the AI is a powerful intelligence.  All these events are "improbable" relative to random organizations of the AI's RAM, so the AI has to hit a narrow target in the space of possibilities to make superintelligent answers come out.

Now, why might one think that an Oracle didn't need goals?  Because on a human level, the term "goal" seems to refer to those times when you said, "I want to be promoted", or "I want a cookie", and when someone asked you "Hey, what time is it?" and you said "7:30" that didn't seem to involve any goals.  Implicitly, you wanted to answer the question; and implicitly, you had a whole, complicated, functionally optimized brain that let you answer the question; and implicitly, you were able to do so because you looked down at your highly optimized watch, that you bought with money, using your skill of turning your head, that you acquired by virtue of curious crawling as an infant.  But that all takes place in the invisible background; it didn't feel like you wanted anything.

Thanks to empathic inference, which uses your own brain as an unopened black box to predict other black boxes, it can feel like "question-answering" is a detachable thing that comes loose of all the optimization pressures behind it - even the existence of a pressure to answer questions!

1. What are the axes we are talking about?

This chapter talks about different types or 'castes' of AI. But there are lots of different ways you could divide up kinds of AI (e.g. earlier we saw brain emulations vs. synthetic AI). So in what ways are we dividing them here? They are related to different approaches to the control problem, but don't appear to be straightforwardly defined by them.

It seems to me we are looking at something close to these two axes:

The castes fit on these axes something like this: 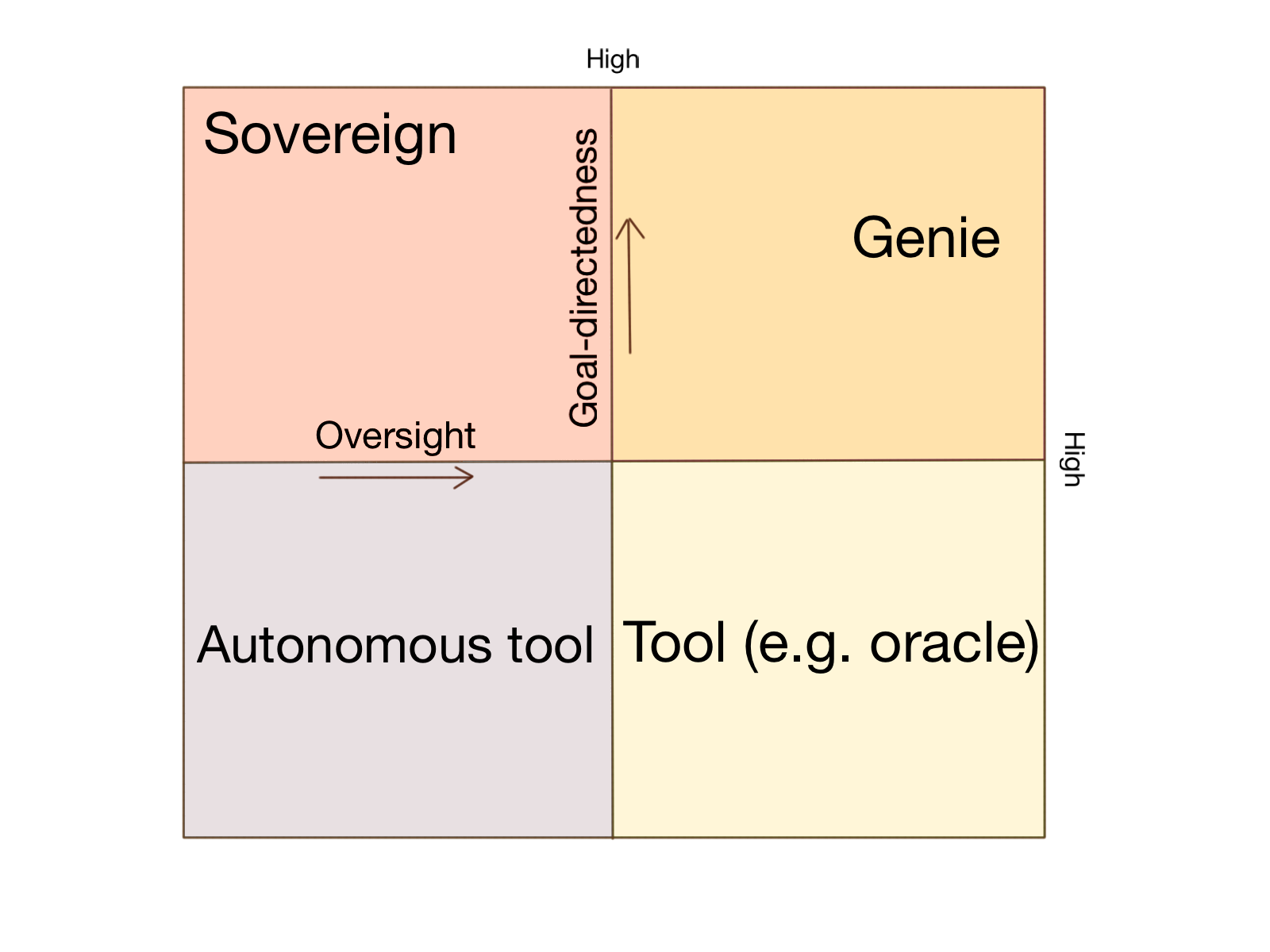 They don't quite neatly fit -- tools are spread between two places, and oracles are a kind of tool (or a kind of genie if they are of the highly constrained agent variety). But I find this a useful way to think about these kinds of AI.

Note that when we think of 'tools', we usually think of them having a lot of oversight - that is, being used by a human, who is making decisions all the time. However you might also imagine what I have called 'autonomous tools', which run on their own but aren't goal directed. For instance an AI that continually reads scientific papers and turns out accurate and engaging science books, without particularly optimizing for doing this more efficiently or trying to get any particular outcome.

We have two weeks on this chapter, so I think it will be good to focus a bit on goal directedness one week and oversight the other, alongside the advertised topics of specific castes. So this week let's focus on oversight, since tools (next week) primarily differ from the other castes mentioned in not being goal-directed.

2. What do goal-directedness and oversight have to do with each other?

Why consider goal-directedness and oversight together? It seems to me there are a couple of reasons.

Goal-directedness and oversight are substitutes, broadly. The more you direct a machine, the less it needs to direct itself. Somehow the machine has to assist with some goals, so either you or the machine needs to care about those goals and direct the machine according to them. The 'autonomous tools' I mentioned appear to be exceptions, but they only seem plausible for a limited range of tasks where minimal goal direction is needed beyond what a designer can do ahead of time.

Another way goal-directedness and oversight are connected is that we might expect both to change as we become better able to align an AI's goals with our own. In order for an AI to be aligned with our goals, the AI must naturally be goal-directed. Also, better alignment should make oversight less necessary.

Bostrom discussed some problems with genies. I'll mention a few others.

One clear downside of a machine which follows your instructions and awaits your consent is that you have to be there giving instructions and consenting to things. In a world full of powerful AIs which needed such oversight, there might be plenty of spare human labor around to do this at the start, if each AI doesn't need too much oversight. However a need for human oversight might bottleneck the proliferation of such AIs.

Another downside of using human labor beyond the cost to the human is that it might be prohibitively slow, depending on the oversight required. If you only had to check in with the AI daily, and it did unimaginably many tasks the rest of the time, oversight probably wouldn't be a great cost. However if  you had to be in the loop and fully understand the decision every time the AI chose how to allocate its internal resources, things could get very slow.

Even if these costs are minor compared to the value of avoiding catastrophe, they may be too large to allow well overseen AIs to compete with more autonomous AIs. Especially if the oversight is mostly to avoid low probability terrible outcomes.

5. How useful is oversight?

Suppose you have a genie that doesn't totally understand human values, but tries hard to listen to you and explain things and do what it thinks you want. How useful is it that you can interact with this genie and have a say in what it does rather than it just being a sovereign?

If the genie's understanding of your values is wrong such that its intended actions will bring about a catastrophe, it's not clear that the genie can describe the outcome to you such that you will notice this. The future is potentially pretty big and complicated, especially compared to your brain, or a short conversation between you and a genie. So the genie would need to summarize a lot. For you to notice the subtle details that would make the future worthless (remember that the genie basically understands your values, so they are probably not really blatant details) the genie will need to direct your attention to them. So your situation would need to be in a middle ground where the AI knew about some features of a potential future that might bother you (so that it could point them out), but wasn't sure if you really would hate them. It seems hard for the AI giving you a 'preview' to help if the AI is just wrong about your values and doesn't know how it is wrong.

Thinking inside the box seems to be the main paper on the topic. Christiano's post on how to use an unfriendly AI is again relevant to how you might use an oracle.

Next week, we will talk about the last caste of this chapter: the tool AI. To prepare, read “Tool-AIs” and “Comparison” from Chapter 10. The discussion will go live at 6pm Pacific time next Monday December 29. Sign up to be notified here.