Conflict vs. mistake in non-zero-sum games

Summary: Whether you behave like a mistake theorist or a conflict theorist may depend more on your negotiating position in a non-zero-sum game than on your worldview.

Plot the payoffs in a non-zero-sum two-player game, and you'll get a convex[1 [LW(p) · GW(p)]] set with the Pareto frontier on the top and right: 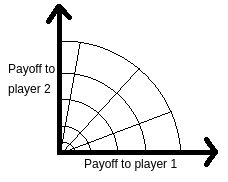 You can describe this set with two parameters: The surplus is how close the outcome is to the Pareto frontier, and the allocation tells you how much the outcome favors player 1 versus player 2. In this illustration, the level sets for surplus and allocation are depicted by concentric curves and radial lines, respectively.

Of course, in the usual formulation, both phases occur simultaneously. But this suggests a couple of negotiation strategies where you try to make one phase happen before the other:

Indeed, the mistake theory strategy pushes the obviously good plan of making things better off for everyone. It can frame all opposition as making the mistake of leaving surplus on the table.

The conflict theory strategy threatens to destroy surplus in order to get a more favorable allocation. Its narrative emphasizes the fact that the players can't maximize their rewards simultaneously.

If you're naturally a mistake theorist, this might make conflict theory seem more appealing. Imagine negotiating with a paperclip maximizer over the fate of billions of lives [LW · GW]. Mutual cooperation is Pareto efficient, but unappealing. It's more sensible to threaten defection in order to save a few more human lives, if you can get away with it.

It also makes mistake theory seem unsavory: Apparently mistake theory is about postponing the allocation negotiation until you're in a comfortable negotiating position. (Or, somewhat better: It's about tricking the other players into cooperating before they can extract concessions from you.)

This is kind of unfair to mistake theory, which is supposed to be about educating decision-makers on efficient policies and building institutions to enable cooperation. None of that is present in this model.

But I think it describes something important about mistake theory which is usually rounded off to something like "[mistake theorists have] become part of a class that’s more interested in protecting its own privileges than in helping the poor or working for the good of all".