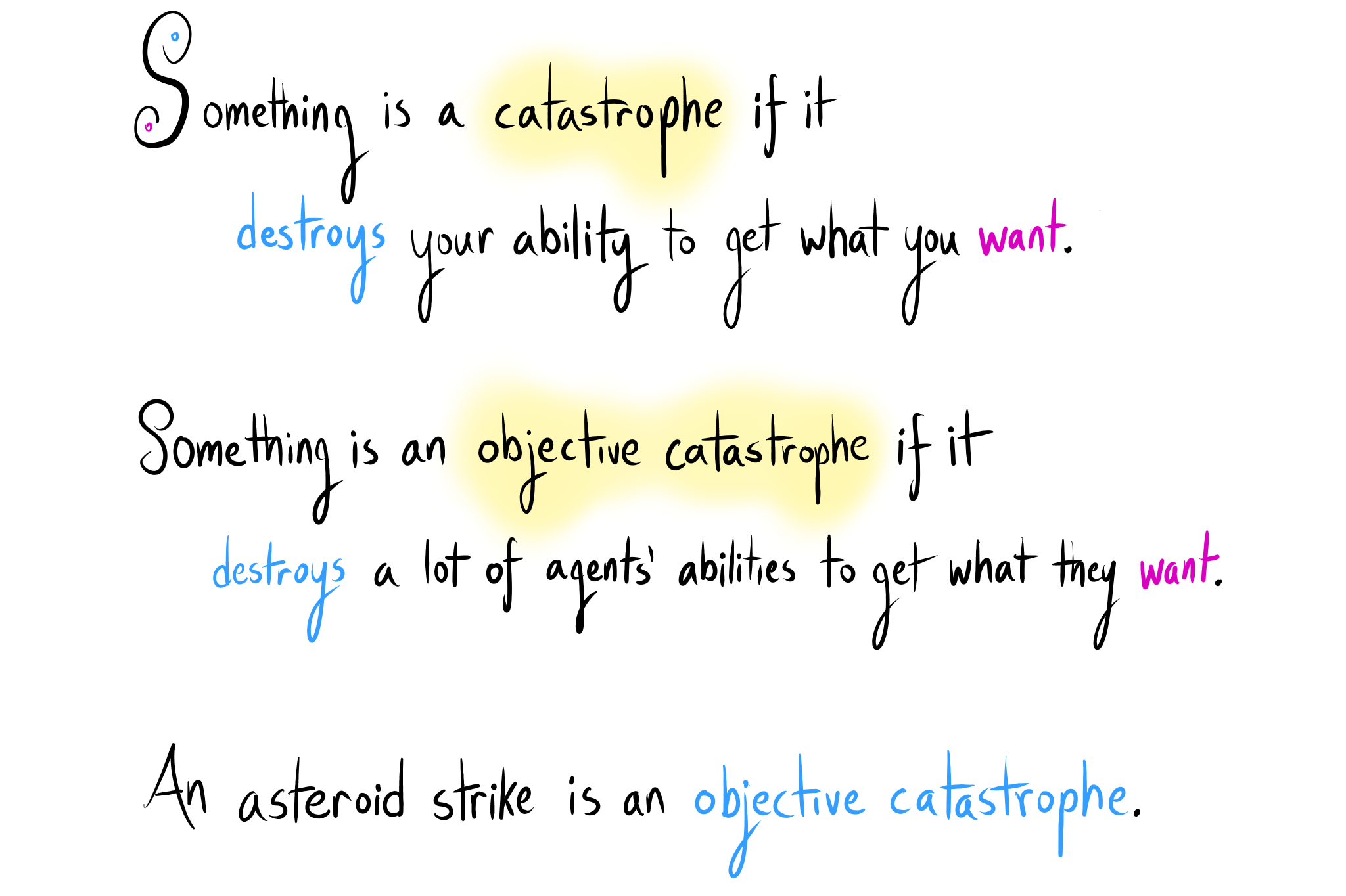 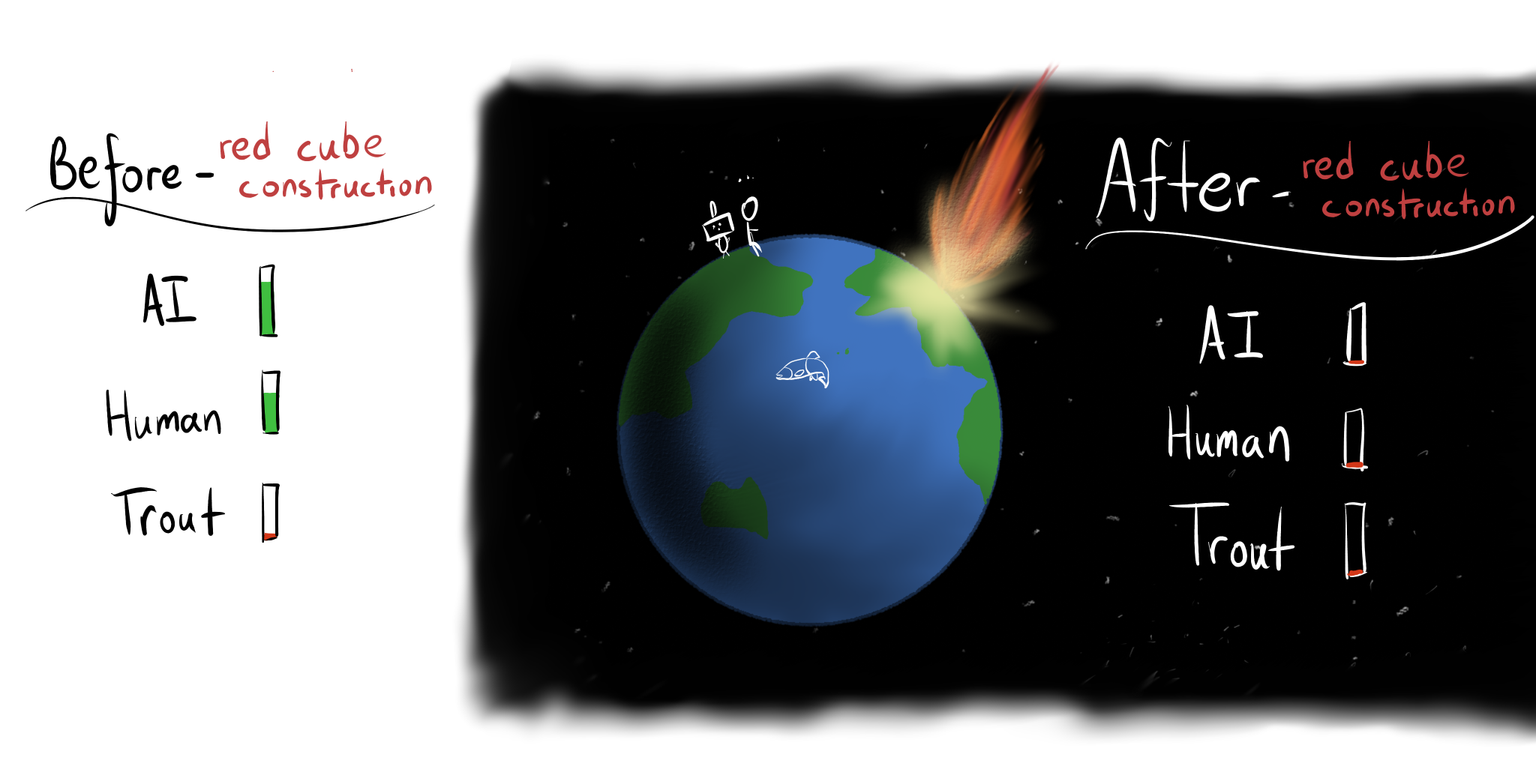 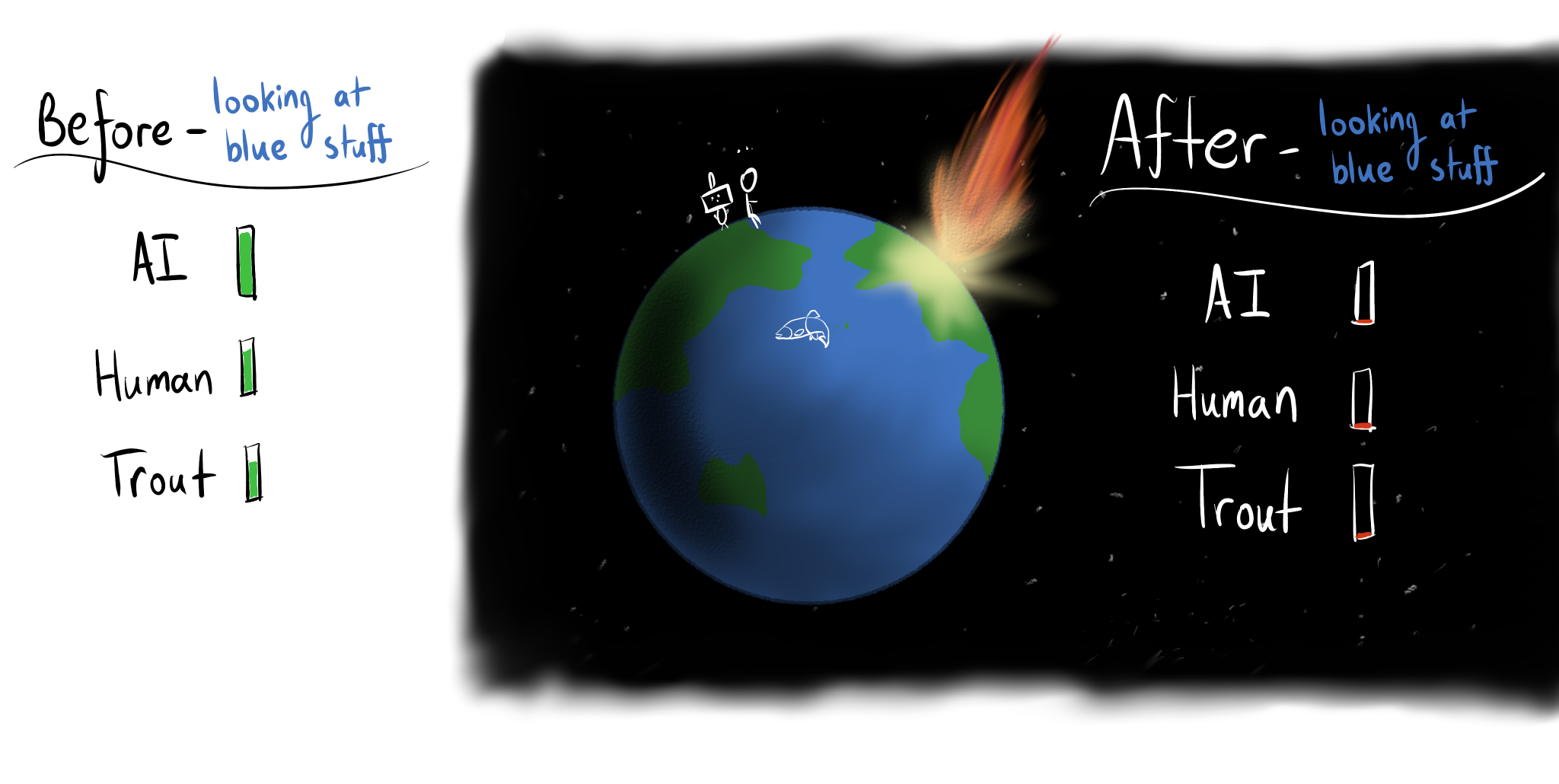 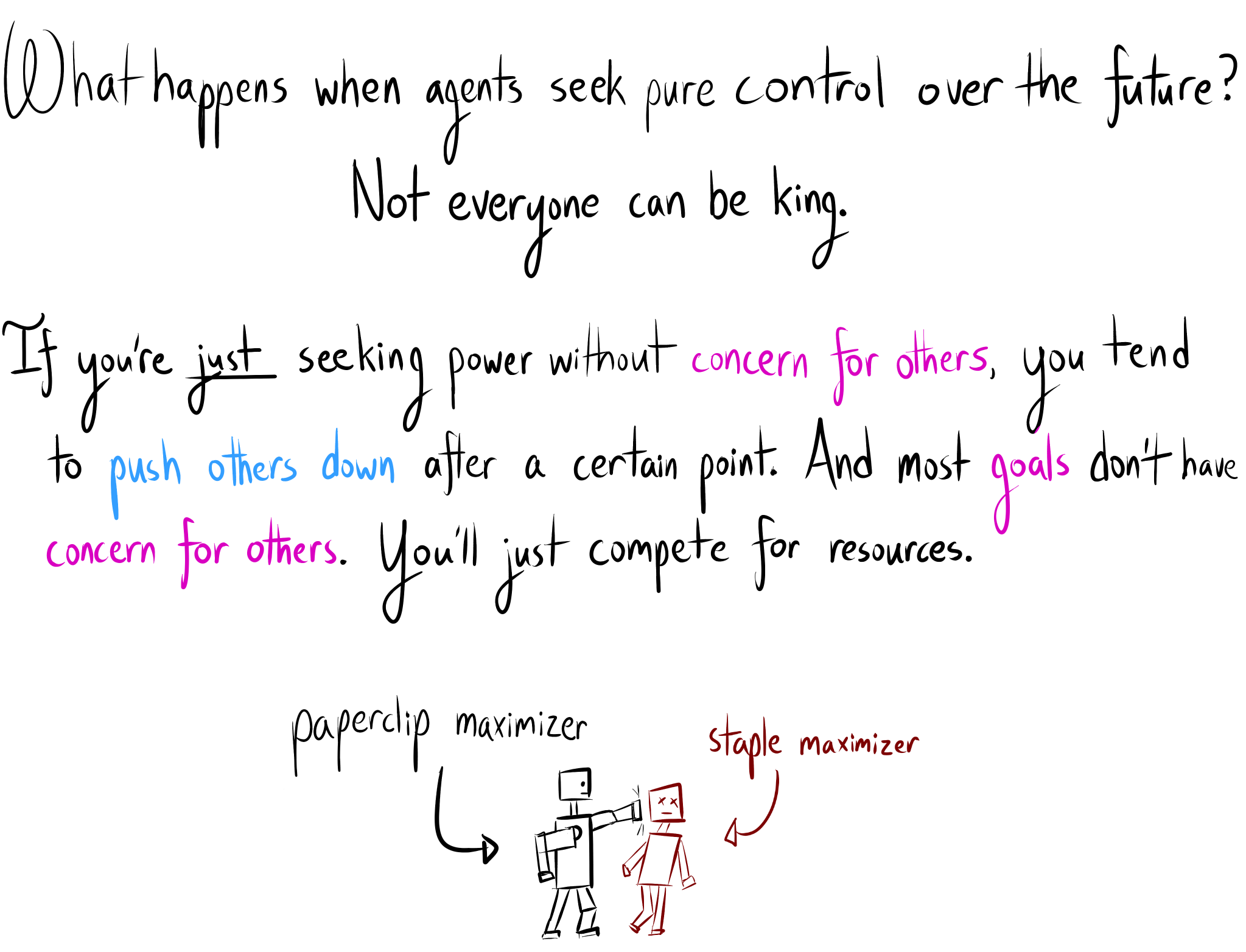 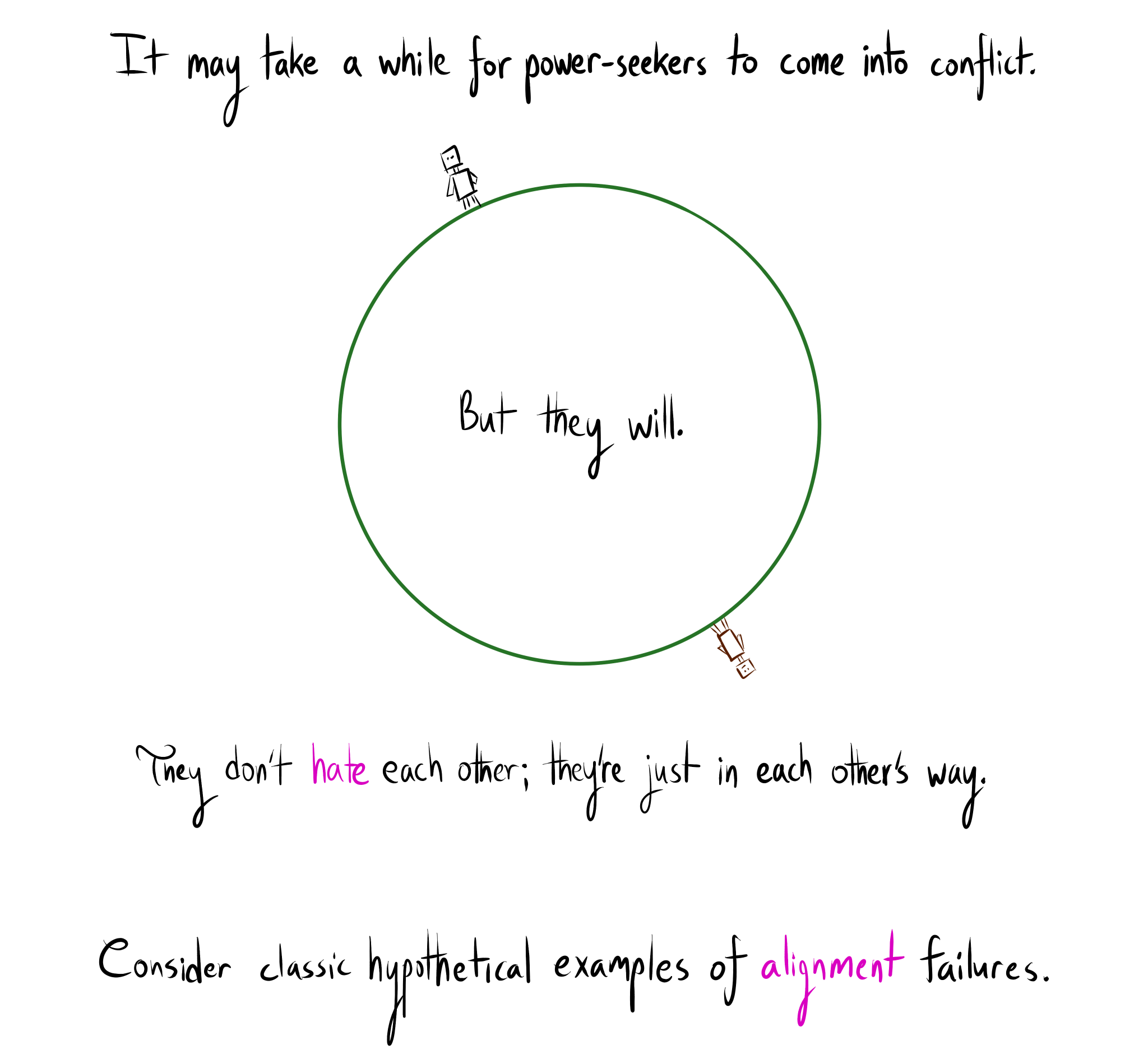 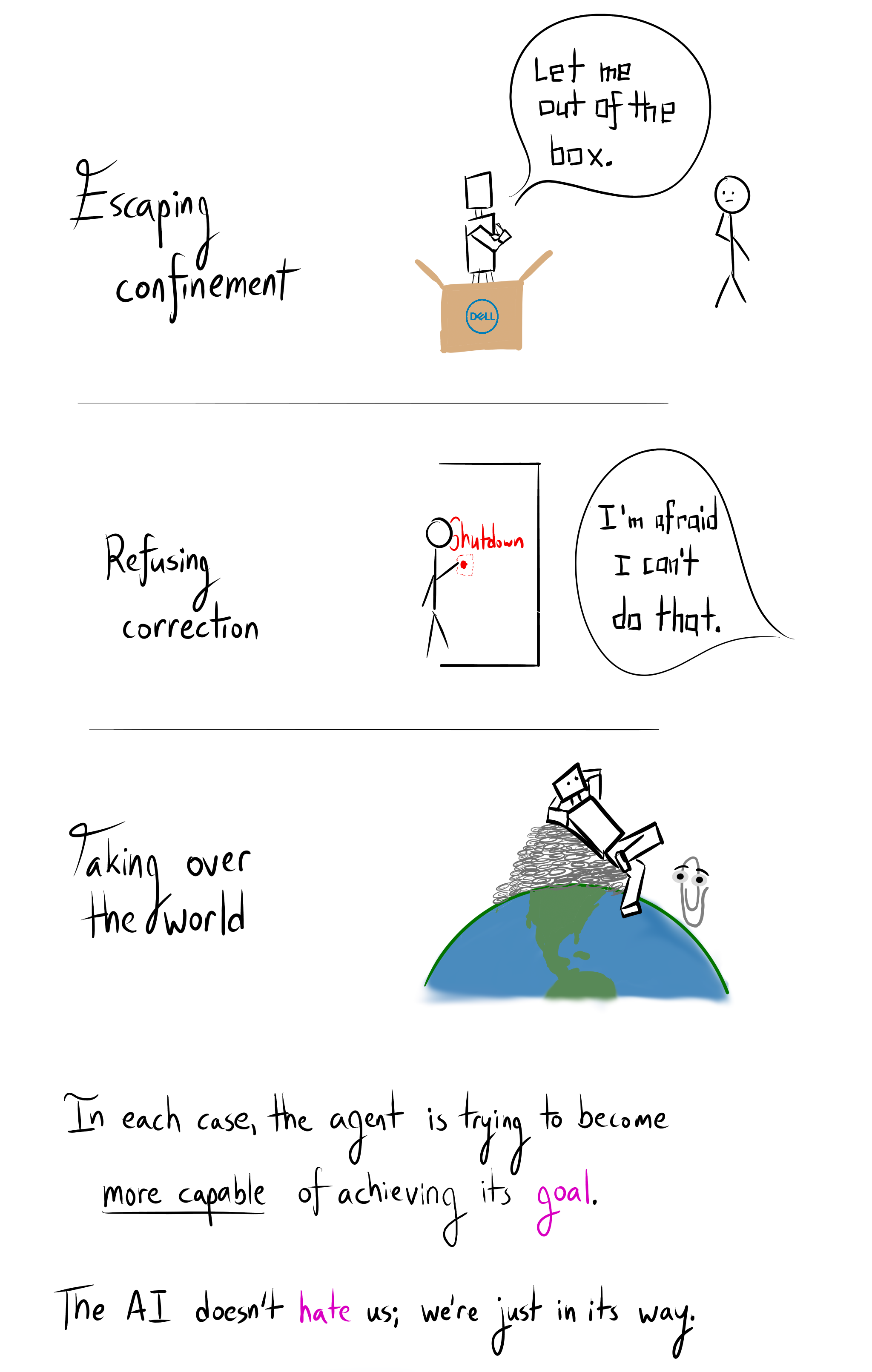 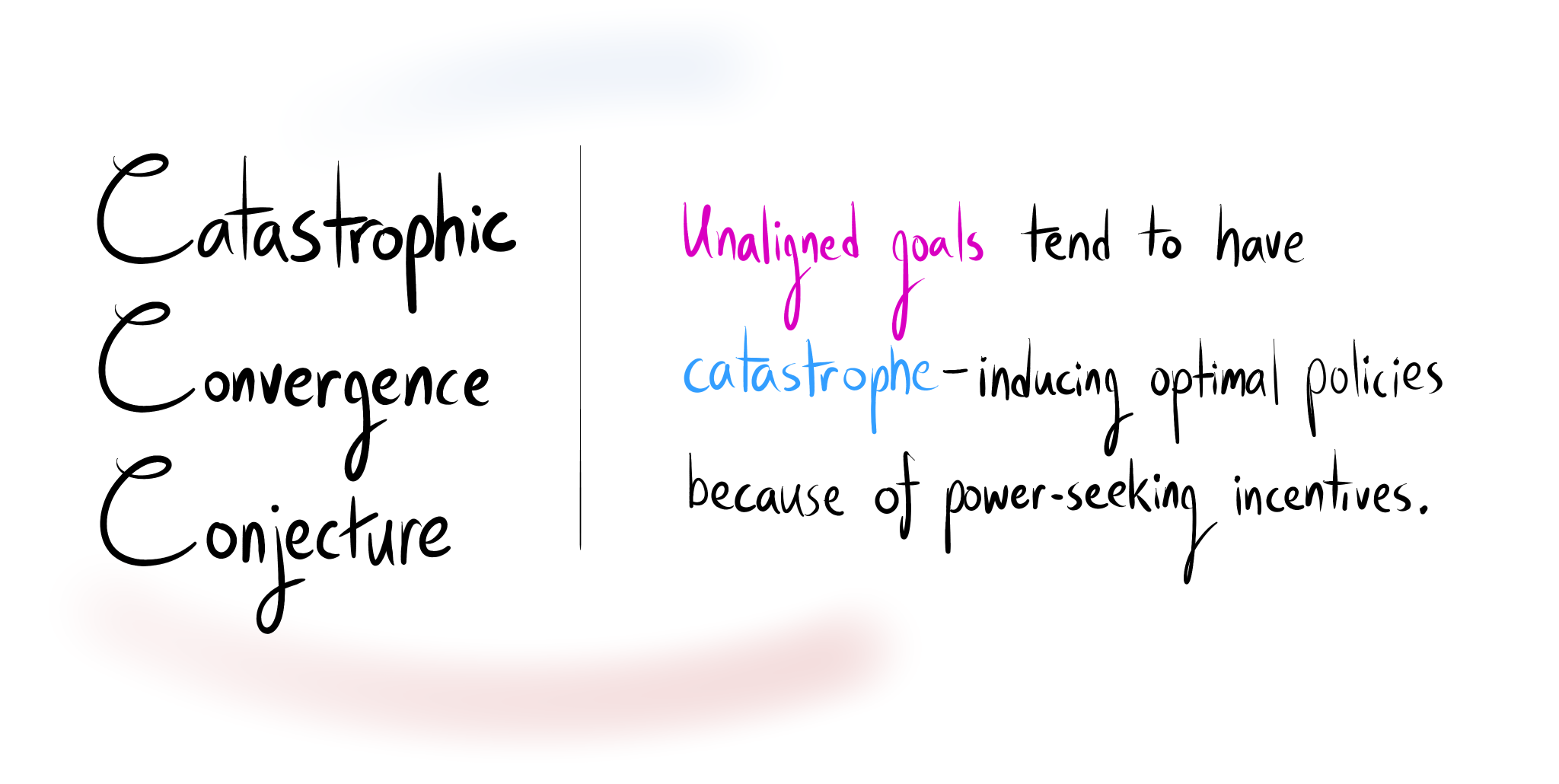 When we act, and others act upon us, we aren’t just changing our ability to do things – we’re shaping the local environment towards certain goals, and away from others.[1] We’re fitting the world to our purposes.

What happens to the AU landscape[2] if a paperclip maximizer takes over the world?[3]

Preferences implicit in the evolution of the AU landscape

Shah et al.'s Preferences Implicit in the State of the World leverages the insight that the world state contains information about what we value. That is, there are agents pushing the world in a certain "direction". If you wake up and see a bunch of vases everywhere, then vases are probably important and you shouldn't explode them.

Similarly, the world is being optimized to facilitate achievement of certain goals. AUs are shifting and morphing, often towards what people locally want done (e.g. setting the table for dinner). How can we leverage this for AI alignment?

Exercise: Brainstorm for two minutes by the clock before I anchor you.

Two approaches immediately come to mind for me. Both rely on the agent focusing on the AU landscape rather than the world state [LW · GW].

Value learning without a prespecified ontology or human model. I have previously criticized [LW · GW] value learning for needing to locate the human within some kind of prespecified ontology (this criticism is not new). By taking only the agent itself as primitive, perhaps we could get around this (we don't need any fancy engineering or arbitrary choices to figure out AUs/optimal value from the agent's perspective).

Force-multiplying AI. Have the AI observe which of its AUs most increase during some initial period of time, after which it pushes the most-increased-AU even further.

I think the naïve implementation of either idea would fail; e.g., there are a lot of degenerate AUs it might find. However, I'm excited by this because a) the AU landscape evolution is an important source of information, b) it feels like there's something here we could do which nicely avoids ontologies, and c) force-multiplication is qualitatively different than existing proposals.

Why can't everyone be king?

Consider two coexisting agents each rewarded for gaining power; let's call them Ogre and Giant. Their reward functions[4] (over the partial-observability observations) are identical. Will they compete? If so, why?

Let's think about something easier first. Imagine two agents each rewarded for drinking coffee. Obviously, they compete with each other to secure the maximum amount of coffee. Their objectives are indexical, so they aren't aligned with each other – even though they share a reward function.

Suppose both agents are able to have maximal power. Remember, Ogre's power can be understood as its ability to achieve a lot of different goals [LW · GW]. Most of Ogre's possible goals need resources; since Giant is also optimally power-seeking, it will act to preserve its own power and prevent Ogre from using the resources. If Giant weren't there, Ogre could better achieve a range of goals. So, Ogre can still gain power by dethroning Giant. They can't both be king.

Just because agents have indexically identical payoffs doesn't mean they're cooperating; to be aligned with another agent, you should want to steer towards the same kinds of futures.

Most agents aren't pure power maximizers. But since the same resource competition usually applies, the reasoning still goes through.

How useful is our definition of "catastrophe" with respect to humans? After all, literally anything could be a catastrophe for some utility function.[5]

Tying one's shoes is absolutely catastrophic for an agent which only finds value in universes in which shoes have never ever ever been tied. Maybe all possible value in the universe is destroyed if we lose at Go to an AI even once [LW(p) · GW(p)]. But this seems rather silly.

But the human AU is not so delicate. That is, given that we have power, we can make value; there don’t seem to be arbitrary, silly value-specific catastrophes for us. Given energy and resources and time and manpower and competence, we can build a better future.

In part, this is because a good chunk of what we care about seems roughly additive over time and space; a bad thing happening somewhere else in spacetime doesn't mean you can't make things better where you are; we have many sources of potential value. In part, this is because we often care about the universe more than the exact universe history; our preferences don’t seem to encode arbitrary deontological landmines. More generally, if we did have such a delicate goal, it would be the case that if we learned that a particular thing had happened at any point in the past in our universe, that entire universe would be partially ruined for us forever. That just doesn't sound realistic.

Consider a psychologically traumatizing event which leaves humans uniquely unable to get what they want, but which leaves everyone else (trout, AI, etc.) unaffected. Our ability to find value is ruined. Is this an example of the delicacy of our AU?

No. This is an example of the delicacy of our implementation; notice also that our AUs for constructing red cubes, reliably looking at blue things, and surviving are also ruined. Our power has been decreased.

In general, the CCC follows from two sub-claims. 1) Given we still have control over the future, humanity's long-term AU is still reasonably high (i.e. we haven't endured a catastrophe). 2) Realistically, agents are only incentivized to take control from us in order to gain power for their own goal. I'm fairly sure the second claim is true ("evil" agents are the exception prompting the "realistically").

Also, we're implicitly considering the simplified frame of a single smart AI affecting the world, and not structural risk via the broader consequences of others also deploying similar agents [LW · GW]. This is important but outside of our scope for now.

Not all unaligned goals induce catastrophes, and of those which do induce catastrophes, not all of them do it because of power-seeking incentives. For example, a reward function for which inaction is the only optimal policy is "unaligned" and non-catastrophic. An "evil" reward function which intrinsically values harming us is unaligned and has a catastrophic optimal policy, but not because of power-seeking incentives.

"Tend to have" means that realistically, the reason we're worrying about catastrophe is because of power-seeking incentives – because the agent is gaining power to better achieve its own goal. Agents don't otherwise seem incentivized to screw us over very hard; CCC can be seen as trying to explain adversarial Goodhart [AF · GW] in this context. If CCC isn't true, that would be important for understanding goal-directed alignment incentives and the loss landscape for how much we value deploying different kinds of optimal agents.

While there exist agents which cause catastrophe for other reasons (e.g. an AI mismanaging the power grid could trigger a nuclear war), the CCC claims that the selection pressure which makes these policies optimal tends to come from power-seeking drives.

"But what about the Blackwell-optimal policy for Tic-Tac-Toe? These agents aren't taking over the world now". The CCC is talking about agents optimizing a reward function in the real world (or, for generality, in another sufficiently complex multiagent environment).

Edit: The initial version of this post talked about "outer alignment"; I changed this to just talk about alignment, because the outer/inner alignment distinction doesn't feel relevant here. What matters is how the AI's policy impacts us; what matters is impact alignment [LW · GW].

In fact even if we only resolved the problem for the similar-subgoals case, it would be pretty good news for AI safety. Catastrophic scenarios are mostly caused by our AI systems failing to effectively pursue convergent instrumental subgoals on our behalf, and these subgoals are by definition shared by a broad range of values.

If the world is not severely damaged in a way that prevents any agent (human or AI) from eventually colonizing space (e.g. severe nuclear winter), then the percentage of the cosmic endowment that humans have access to will be roughly close to to the percentage of power that humans have control of at the time of space colonization. So the most relevant factors for the composition of the universe are (a) whether anyone at all can take advantage of the cosmic endowment, and (b) the long-term balance of power between different agents (humans and AIs).

I expect that ensuring that the long-term balance of power favors humans constitutes most of the AI alignment problem...