Why don't singularitarians bet on the creation of AGI by buying stocks?

With the recent stock market sale, I've been looking over stocks to see which seem to be worth buying. (As background information [LW(p) · GW(p)], I'm buying stocks to have fun and bet my beliefs. If you believe in the efficient market hypothesis, buying stocks at random should perform roughly as well as the market as a whole, and the opportunity cost doesn't seem super high. Making a 40% return buying $ZM right before investors started paying attention to COVID-19 hasn't discouraged me.)

Standard investing advice is to stay diversified. I take the diversification suggestion further than most: A chunk of my net worth is in disaster preparation measures, and I'm also buying stock in companies like Facebook and Uber that I think have a nontrivial shot at creating AGI.

AGI could be tremendously economically valuable. So one question about companies with AI research divisions is whether the possibility that they'll create AGI is already "priced in" to their stock. If the company's share price already reflects the possibility that they'll create this transformative technology, we shouldn't expect to make money from the singularity on expectation by buying their stock.

To investigate this question, let's examine Alphabet Inc's share price around the time AlphaGo defeated world Go champion Lee Sedol in March 2016. This has been referred to as a "Sputnik moment" that inspired the Chinese government to start investing billions of dollars in AI research. As a reminder of the kind of conversations that were being had at the time, here are some quotes from a Facebook post Eliezer Yudkowsky made:

“Oh, look,” I tweeted, “it only took 5 months to go from landing one person on Mars to Mars being overpopulated.”

We’re not even in the recursive regime yet, and we’re still starting to enter the jumpy unpredictable phase where people are like “What just happened?”

One company with a big insight jumped way ahead of everyone else.

AI is either overwhelmingly stupider or overwhelmingly smarter than you. The more other AI progress and the greater the hardware overhang, the less time you spend in the narrow space between these regions. There was a time when AIs were roughly as good as the best human Go-players, and it was a week in late January.

Here is Alphabet's historical stock price. Can you spot the point at which AlphaGo defeated the world Go champion? 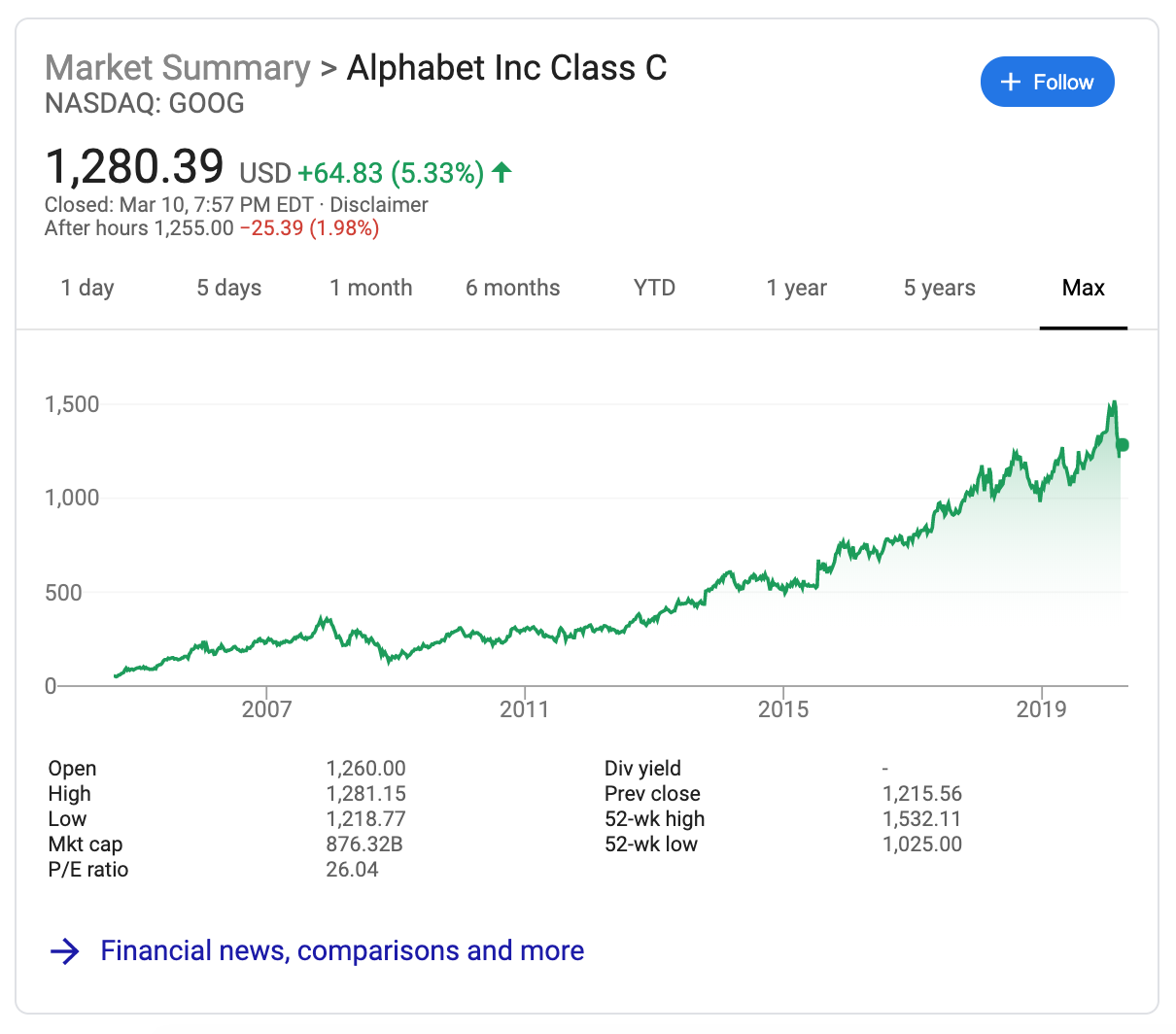 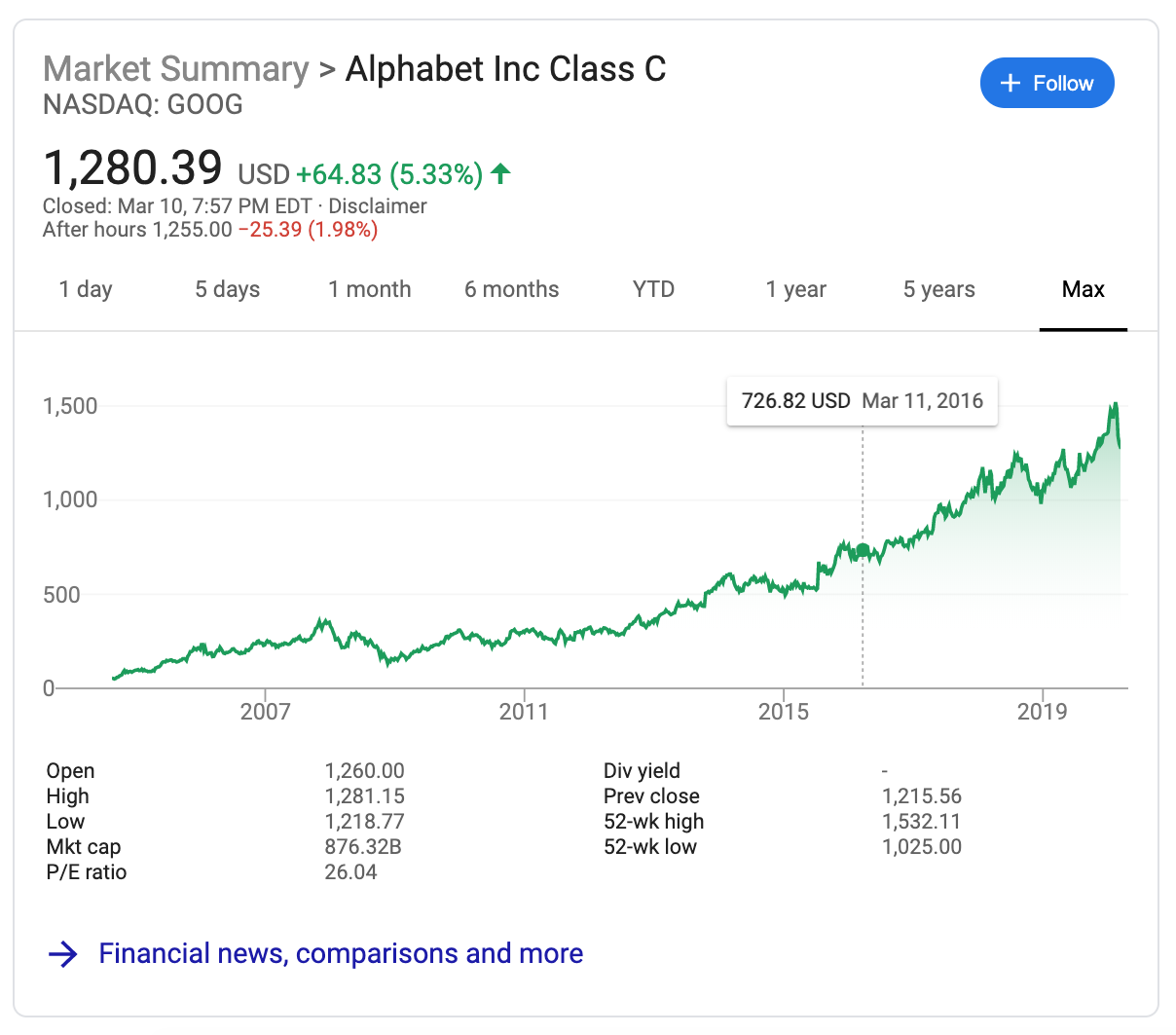 $GOOG was worth about $727 on March 11, a Friday. That weekend, a Go commentator wrote:

AlphaGo made history once again on Saturday, as the first computer program to defeat a top professional Go player in an even match.

In the third of five games with Lee Sedol 9p, AlphaGo won so convincingly as to remove all doubt about its strength from the minds of experienced players.

In fact, it played so well that it was almost scary.

Maybe if Game 3 had happened on a weekday, $GOOG would've moved appreciably. As it is, Game 4 happened on Sunday, and AlphaGo lost. So we don't really know how the market would react to the creation of an "almost scary" AI whose strength none could doubt.

...consider [the singularity]: the ability to predict the market suddenly shifted from the day to day necessary data analysis for stock price prediction that revolves more around business KPIs and geopolitical processes to understanding [artificial intelligence]. How many of the Wall Street analysts are [artificial intelligence] experts would you think? Probably very few. The rules have changes and prior data analysis resources (currently hired analysts) became suddenly very inefficient.

Either that, or all the true AI experts (you know, the ones who spend their time trading stocks all day instead of doing AI research) knew that AlphaWhatever was a big nothingburger all along. 0% chance of transformation, no reason to buy $GOOG.

Even if the singularity is transformative, you want to be a shareholder

One objection goes something like: Yes indeed, I do have insider information, due to reading LessWrong dot com, that there will be this transformative change due to AI. And yes indeed, it appears the market isn't pricing this info in. But, I can't stand to profit from this info because as soon as the singularity happens, money becomes worthless! Either we'll have a positive singularity, and material abundance ensues, or we'll have a negative singularity, and paperclips ensue. That's why my retirement portfolio is geared towards business-as-usual scenarios.

Here are some objections to this line of reasoning:

I suspect Monday will not be the only time stocks go on sale in 2020. Given the possibility of future flash sales, I suggest you get set up with a brokerage now. I recommend Charles Schwab. (They also have a great checking account.)

If you believe in the singularity, why aren't you betting on it?