Recently I was having a conversation with a friend about personal growth (any form of deliberate gain in capability or subjective wellbeing).

We were talking past each other a lot. Eventually it became clear that most of their recent growth had been healing and blocker-fixing based, whereas most of mine had been skill based. And this was shaping where we were naturally inclined to look.

This prompted me to take stock of all the strategies I could think of for growth. Here's what I've thought of so far. These aren't quite natural clusters (some overlap, or don't quite fit into the same ontology), but seem like they cover most avenues:

This is somewhat related to Lifelonglearner's Development Framework of Rationality, and Brienne's 4 quadrants, but through a somewhat different lens. 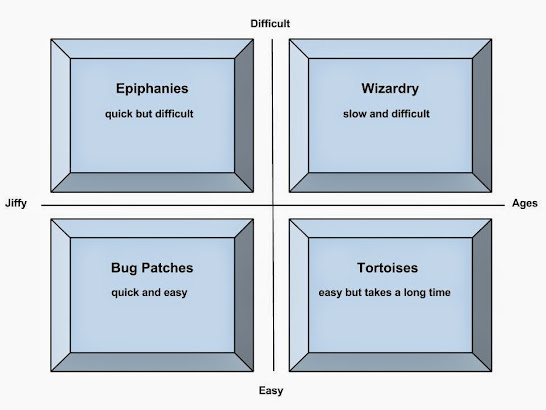 Working on a skill or habit you mostly understand, occasionally, in the background. Typically yields a pretty small return [LW · GW] (but one which adds up over the years [LW · GW], especially if you do it consistently).

Working on a skill with your all – spending hour(s) each day on it. This can yield more return but is requires more cognitive focus and energy. This seems qualitatively different from low-key practice.

Sometimes this is Deliberate Practice in the technical sense (quick feedback loops, building mental models that your brain can cache into chunks), but not always.

Sometimes you're learning new information, that is able to rapidly turn into a skill at a much faster rate than normal. You could try to learn math/violin/programming from first principles and practice, but a tutorial or a teacher who has carefully optimized their explanations can quickly give you entire new skills in a short timespan.

(Making the best use of them may require practice as well, but during the initial learning period you may be gaining huge returns)

Changing Your Environment and/or Incentives

The fastest route I've personally found to overall self improvement is changing environment – a new job, a new apartment, a new social network. These can radically change how you feel about yourself, or what is easy, or what behaviors are reinforced.

I know multiple people who had trouble focusing at work, got a job that they actually cared about, or which required the skills they enjoyed most, or had coworkers that provided subtle reinforcement in the right directions.

I briefly lived in an apartment building with a gym, and I found it way easier to exercise there than I did at other places. (Even homes where I got some exercise equipment)

It's possibly to reshape your environment on purpose (which I think yields improvement roughly on par with moderate skill practice), but the most powerful returns here have been sort of random and hard to control in my experience.

Discovering Something You Enjoy or are Well Suited For (Try Things)

People vary how much certain skills and activities resonate with them, and how fast they can improve. If you find something you really enjoy, you may be much more able to put in the hours to practice it, or you may gain skill much more rapidly than other other people.

I have a friend who would never have predicted they'd be good at dancing a priori, but who tried it on a whim and it was amazing and changed both their physical well being and social life.

Simple things, that if you only knew to do them, would radically change your quality of life or capabilities.

Sometimes you're able to find a cheat code – instead of painstakingly dieting for months with little benefit, it turns out keto works well for your biochemistry. You're addicted to the internet, and you find out about SelfControl or Freedom.

This is sort of the intersection of "realizing you have a blocker", but where removing the blocker requires effort, skill or just time, rather than an immediate "oh, I just need to do X differently."

I haven't done this myself, but I've heard some people describe a process of actually getting all the pieces of themselves into alignment, where instead of fighting themselves ("I want cake!" "no I want to diet!") they reach a point where all their drives have a shared understanding of the world and are operating as a single agent.

There's minor versions of this that resolve alignment on one particular issue [LW · GW], and I'm told a deeper version exists where your entire self trusts itself to do the right thing, and then you no longer have to think in terms of willpower or energy expenditure (and other things that the sort of paradigm that cares about willpower or energy expenditure isn't even able to see)

What to do with this?

These are all things I'd thought about before, but I hadn't thought about them all at once. And I'm finding it shapes how I think people and communities oriented around self-improvement should direct their attention.

It matters what strategies you're even considering.

I don't think I'm currently have any specific blockers that need removing, and I can clearly see skills that I need to gain. But, people with blockers or in need of healing often don't see that they have them. And fixing them can radically change your landscape.

I'm currently seeing all the above strategies through a finance lens. There are things you can do that reliably output 1-3% return, year after year if you just stick with them. There are high risk / high return exploration moves you can make – discovering ways in which you need healing or are blocked or are missing cheat codes. When they pay off it feels like they have 50-300% returns in the space of a week, but actually finding the right ones takes time and amortized over the years it takes searching (and building prerequisite skills of self-awareness), it's probably more like a 5-10% rate.

I'm not a person who currently understands healing, and I've updated a bit that that's an important part of the overall paradigm that the rationality community doesn't tend to be that good at (although to be fair, I don't think most people are).

I think the original mythology of the rationality community is based around cheat codes – if we can munchkin our way through the lowest hanging fruit, we can win at life. But this doesn't actually happen that often, and meanwhile it can be demoralizing to be expecting bursts of 300% returns when in fact 2-3% should be your default assumption.