I have seen a lot of [AF · GW] confusion recently [AF · GW] surrounding exactly how outer and inner alignment should be defined and I want to try and provide my attempt at a clarification.

Here's my diagram of how I think the various concepts should fit together: 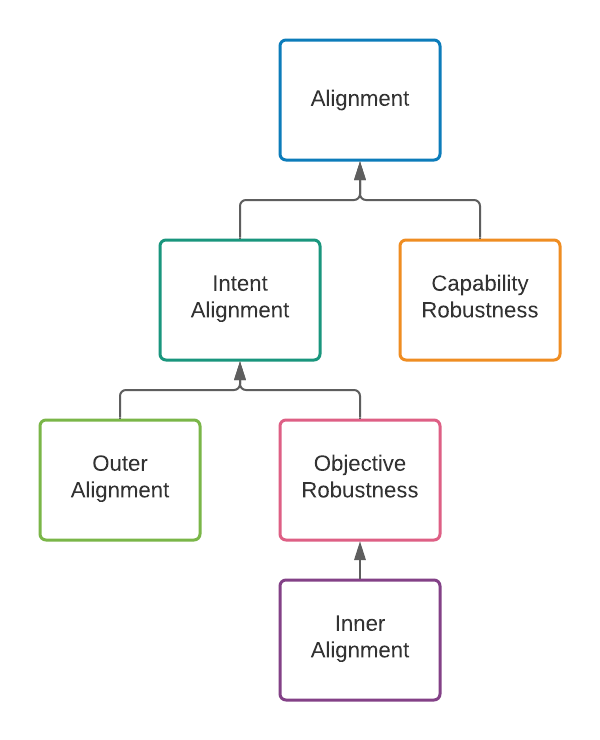 The idea of this diagram is that the arrows are implications—that is, for any problem in the diagram, if its direct subproblems are solved, then it should be solved as well (though not necessarily vice versa). Thus, we get:

And here are all my definitions of the relevant terms which I think produce those implications:

(Impact) Alignment: An agent is impact aligned (with humans) if it doesn't take actions that we would judge to be bad/problematic/dangerous/catastrophic.

Intent Alignment: An agent is intent aligned if the optimal policy for its behavioral objective[1] is impact aligned with humans.

Outer Alignment: An objective function r is outer aligned [AF · GW] if all models that perform optimally on r in the limit of perfect training and infinite data are intent aligned.[2]

Robustness: An agent is robust if it performs well on the base objective it was trained under even in deployment/off-distribution.[3]

Objective Robustness: An agent is objective robust [AF · GW] if the optimal policy for its behavioral objective is impact aligned with the base objective it was trained under.

Capability Robustness: An agent is capability robust [AF · GW] if it performs well on its behavioral objective even in deployment/off-distribution.

Inner Alignment: A mesa-optimizer is inner aligned if the optimal policy for its mesa-objective is impact aligned with the base objective it was trained under.

And an explanation of each of the diagram's implications:

If a model is both outer and inner aligned, what does that imply?

Intent alignment. Reading off the implications from the diagram, we can see that the conjunction of outer and inner alignment gets us to intent alignment, but not all the way to impact alignment, as we're missing capability robustness.

No. As I just mentioned, the conjunction of both outer and inner alignment only gives us intent alignment, not impact alignment. Furthermore, if the model is not a mesa-optimizer, then it can be objective robust (and thus intent aligned) without being inner aligned.

Does a model have to be inner aligned to be impact aligned?

What type of problem is deceptive alignment?[5]

What type of problem is training a model to maximize paperclips?

Outer alignment—maximizing paperclips isn't an aligned objective even in the limit of infinite data.

How does this picture relate to a more robustness-centric version? 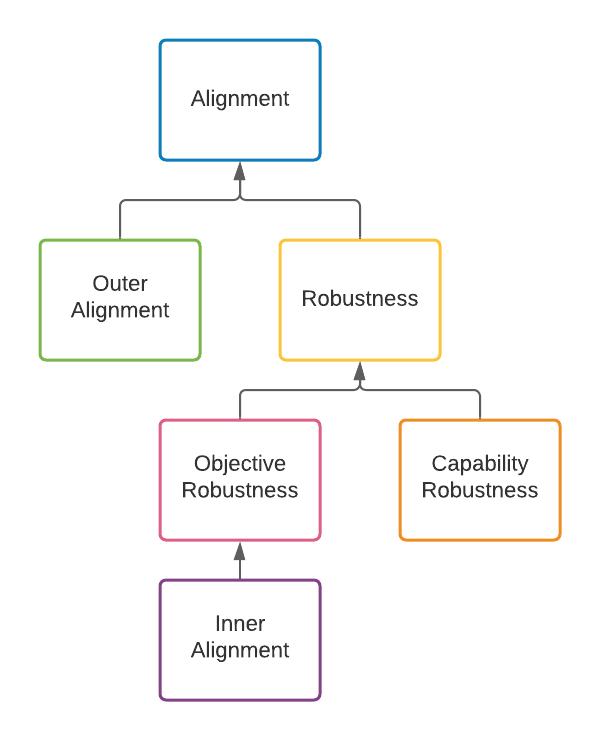 Edit: Previously I had this diagram only in a footnote, but I decided it was useful enough to promote it to the main body.