Vim is a terminal-based editor optimized for speed. Keys are hotkeys by default. Vim does not even use Ctrl for most of them. Maneuvering via hotkeys is so efficient mouse input is often disabled by default.

This guide focuses on the features I use most frequently. It has nothing about with native Vim windows because I use i3 or Spacemacs instead. If you feel I left out a valuable feature then please let me know about it in the comments.

The simplest way to move is via the hjkl keys.

A sequence of nonempty lines is called a paragraph. The {} keys move the cursor forward and back by paragraphs.

The ; command repeats the most recent fFtT command. The , command is like ; except backwards. If you use an F command followed by a , then the double-backwardsness will cancel itself out.

The 0^$ keys move the cursor to the beginning and end of a line.

The HLM keys move the cursor around relative to the viewing window itself.

You can move the viewing window itself with z and Ctrl keys.

You can move the cursor itself up and down visible lines with the g prefix.

The g key can also go to a particular line.

The / key performs search. You type / then the string you are searching for and then press Enter. The ?nN keys are analogous to F;n.

The () characters move forward and backward one sentence.

You can (invisibly) mark places in your buffer to return to later. You can set one mark per letter. Lowercase letters a-z are buffer-specific e.g. each buffer can have its own "a" mark. Uppercase letters A-Z are global e.g. only one buffer at a time can have an "A" mark.

Some marks are populated automatically. Of the automatic marks, I only use ''. You can find the others here.

Now that you know how to move, we can edit some text. Most of the time you edit text you should use the dyp keys.

The d key operates on text objects and movement commands. For example dtA deletes everything up to (but not including) the next "A" on the current line.

y is identical to d except it leaves your buffer unchanged.

By default, p and P will put the last text you deleted or yanked. You can save text into registers by prefixing "<register> before your delete or yank command. For example, "add deletes the current line and saves it into register "a".

There is one register for each letter a-z. If you use a capital letter then your delete or yank command will append to the register instead of overwriting it. You can put from a register by prefixing your p or P command with the register. For example, "ap" will put from register "a".

You can find a list of special registers here.

Remember how I said you could follow d and y with a movement command or a text object? Remember from earlier the concept of "words" and "paragraphs"? Here we put them together into a simple grammar.

Other text objects include '"[]{}<>. They all do what you would expect them to do. t refers to an HTML-like tag.

You cannot write everything by yanking and putting pieces of existing text together. Sometimes you have to insert text into a document. Several different keys drop you into insert mode.

The c key is like d except it drops you into insert mode afterward.

The . key might be the most important key in all of Vim. Generally-speaking, the more you use the . operator the better you are at Vim.

u and Ctrl-r operate like the undo and redo stack you are familiar with.

If you undo a long series of edits and then mistakenly make an edit you can undo the damage with g+ and g- which traverse the nodes of the tree in chronological and reverse-chronological order.

A macro is a series of keystrokes. Macros are good for automating repetitive tasks, especially editing structured text.

To define a macro, start by pressing the q key. Then pick a letter a-z at which to save the macro. Then execute the macro manually. When you are done typing the macro, press q again.

Once you have a macro defined, you can press @ followed by the macro's letter to execute the macro.

Macros are well-behaved. If a macro modifies a line and then goes down one line and you tell Vim to execute the macro 1000 times but your buffer only has 700 lines then Vim will stop when it gets to the end of your buffer.

Visual modes are similar to highlighting. Visual modes have their uses, but it is usually faster to avoid them.

Typing ZZ does the same thing as the :wq command. 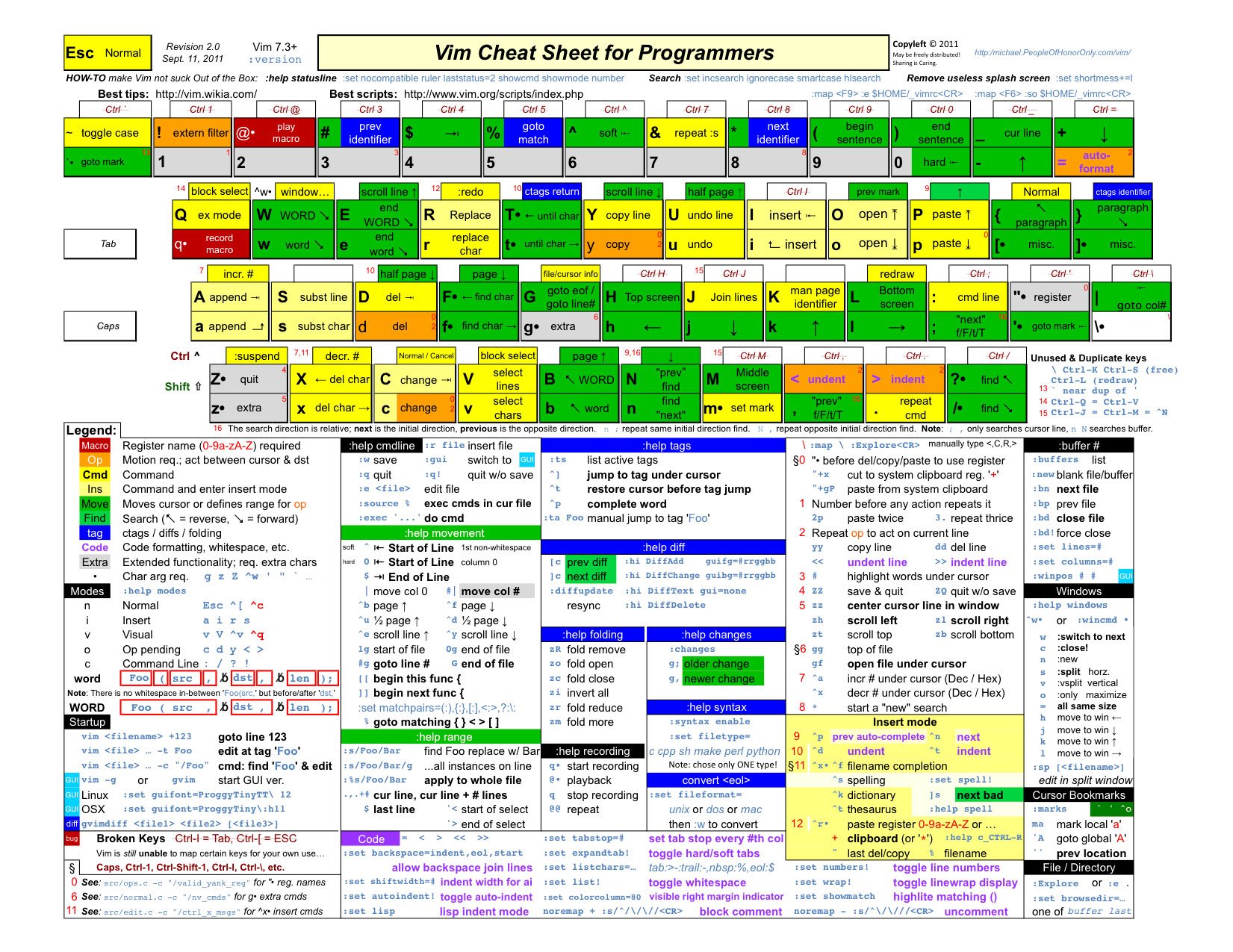