This'll be the first of a collection of posts about the growing Secular Solstice. This post gives an overview of what happened this year. Future posts will explore what types of Solstice content resonates with which people, what I've learned about how Less Wrong culture intersects with other cultures, and updates I've made about ritual as it relates to individuals as well as movement building.

For the past three years, I've been spending the last several months of each year frantically writing songs, figuring out logistics, and promoting the New York Winter Solstice celebration for the Rationality and Secular communities in NYC.

This year... well, I did that too. But I also finally got to go a Solstice that I *wasn't* responsible for. I went to the Bay Area on December 13th, traveled straight from the airport to the dress rehearsal...

...and I found a community coming together to create something meaningful. I walked into the hall and found some 30 or so people, with some stringing together lights, some people tying decorations around candles, a choir singing together... it felt very much like a genuine holiday coming together in an organic fashion.

(There was some squabbling about how to best perform particular songs... but it felt *very* much to me like real holiday squabbling, whenever a family of creative people with strong opinions on things get together, and I found it surprisingly heartwarming) 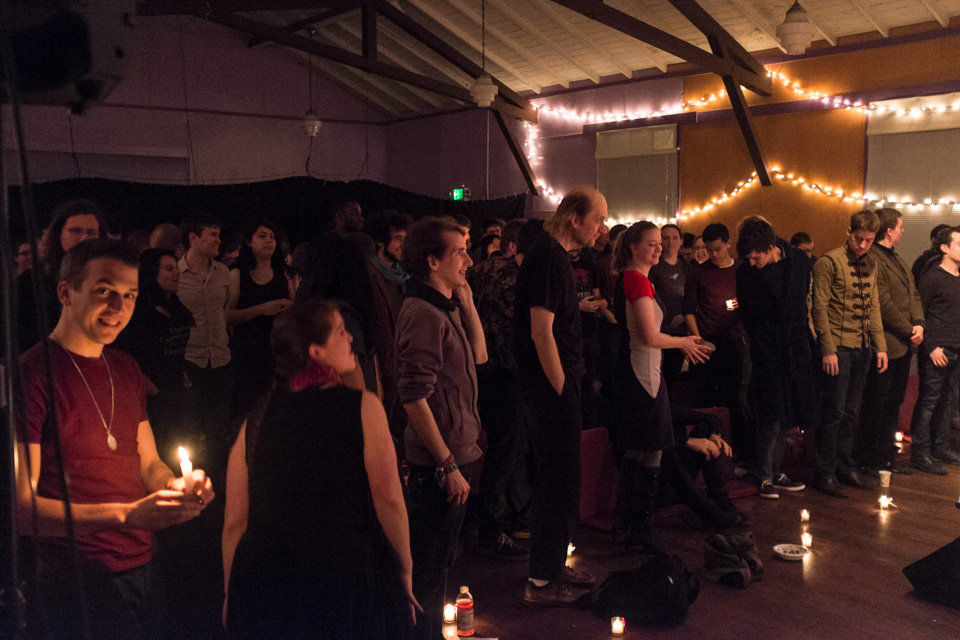 This year there were four large Solstices in the US and one small but intense 3-day event in Leipzig. Each of them had a somewhat different audience and a different focus. Each was put on by local communities who I encouraged to put their own spin on it, bringing a mix of new and "traditional" songs. I've gotten some interesting feedback on which parts of Less Wrong culture resonate with which people.

Solstices that I actively collaborated with and/or consulted on include:

Bay Area - The most explicitly Less Wrong-y and transhumanist Solstice this year. Approximately 130 attendees. I suspect had the largest choir leading songs. About half of the audience seemed to be from what I'd consider the collective Rationality community (i.e. EA/Less Wrong/CFAR) and half were "friends of friends" who were less Less Wrong-y.

(If you went to the Bay Solstice, you can fill out the anonymous feedback form here. If you don't have much time, at least answering the first couple questions would be helpful)

Seattle - Run by a mix of Less Wrong and EA types. It was a shorter ceremony but included additional activities like improv games, Non-Violent Communication workshops and other ways to break the ice and help people bond. There between 50-60 attendees.

San Diego - This was put on by Sunday Assembly and the local Coalition of Reason (a collection of secular/humanist/atheist groups), with no Less Wrong connection at all. They also had fewer songs, more stories and other group activities. This one had about 100 adult attendees and about 20 children. (Probably the most family friendly of the bunch).

Leipzig - This was a three day workshop, with around 20 people who worked collaboratively to design and run a ritual together, along with some highlight songs from the "traditional" Brighter Than Today program.

New York - I ran this personally, co-sponsored by Sunday Assembly and Ethical Culture. My goal with the event was to highlight important ideas I've learned from Less Wrong and Effective Altruism, framed in the language of the general secular movement. I also wanted to address particular issues affecting the New York Rationality community. We had 180 attendees, about half from the Rationality/EA communities and half from various secular communities.

(If you went to the NYC Solstice, you can fill out the anonymous feedback form here. Again, if you don't have much time, it's still helpful if you answer the first couple questions)

I was put in touch with a reporter who was excited to cover the Solstice's growth as secular holiday. She ended up attending the one in San Francisco. (We talked beforehand about how the Bay Area Solstice would be put on by a local community with a lot of Silicon Valley tech-entrepreneurship-types, how it'd likely have more of a focus on technology, and that they'd be trying out some sillier songs that I wasn't sure would work at a more mainstream event. She noted that she would focus on covering the growth of the holiday as a whole rather than focusing on the particular execution at the Bay Area event).

She wrote an article for the Religious News Wire, which was picked up by the Washington Post website among other places. The article was extremely positive (although it mistakenly attributes some speeches to me which were actually given by locals). I mentioned that to her and she edited the original, but the Washington Post had already picked up the earlier version.

“We live in a world beyond the reach of God,” one of the service’s many readers said as 130 or so people gathered huddled over white candles in glass votives at Humanist Hall — a purple-painted house near downtown Oakland. “It is a hard universe. If we want to build a softer universe we will have to do it ourselves.” As a choir broke into “Here Comes the Sun,” an inscription painted on the wall beamed down upon the gathered, “The world is my country, to do good is my religion.”

I deliberately encourage experimentation with the format - real ritual evolves, and if we want great ritual (in particular, great ritual-for-your-particular-local-community, as opposed to great ritual-for-the-NYC-crowd that you're trying to emulate), we want to iterate faster, see what resonates with people, and let the less interesting variations die out.

This year I'm working to ensure each local solstice does a feedback form and sends it out as soon as possible. I want to get a sense of what things resonate (or don't) fairly reliably across the world and what things happened to work for particular groups or small sample sizes.

(And again, we definitely want negative feedback, in particular from people who want *something* similar to the Solstice but didn't like the execution of it)

One thing that's clear is that transhumanist and LW content is polarizing, even within the Less Wrong crowd - some people really love it and it makes them feel connected and inspired. Others find it very offputting. It's possible that the best solution is to have multiple events that cater to different people. But I've also found it's very possible (albeit harder - it took me a couple years of practice) to make an event that works on multiple levels, resonating with the mainstream secular community with Easter eggs that are funny/sad/inspiring to people in the LW or Transhuman spheres.

Another thing that's perhaps more surprising: people who don't know what Less Wrong or Transhumanism are at all tend to be perfectly fine with Less Wrong and a lot of Transhumanist content and can be pretty oblivious to even fairly direct anti-death messages. It's the people who know about the memesphere and either don't like it or are worried about their friends not liking it that are most uncomfortable.

What makes a Secular Solstice™?

So, if experimentation is a core element of the whole endeavor, what makes something a Secular Solstice as opposed to a solstice-that-is-secular? Or any other non-theistic holiday? The previous attempt at a humanist holiday, HumanLight, hasn't really caught on, and I think that's largely because it's deliberately flexible - you can celebrate it on whatever day you want, with whatever traditions you want, so long as it ties in with humanity-as-a-force-for-good.

Being too flexible or generic makes for a watered-down experience that nobody especially likes, or a collection of random experiences that don't have much in common with each other.

So my answer is this:

The core element of the Brighter Than Today Solstice is the emotional arc. It begins fun and upbeat. It turns somber, then sad, before turning uplifting and inspirational. It should lead people from light to darkness to light again, both literally and metaphorically.

The single most important image people should imagine, when they are visualizing the solstice, is the Candlelit Story and the Moment of Darkness - a moment when all but one candle has been extinguished, and a story is told about the hardships we've faced and the hardships yet to come. The story should end giving people reason to hope, without resorting to comforting falsehoods.

Then that candle is extinguished, and people sit in the darkness for a minute before the lights are rekindled and hope returns in earnest.

The particular songs I've written and found are not essential, nor is even the idea of music itself necessarily. (Although I highly recommend it, and I highly recommend finding songs that fill similar purposes. You might not be a fan of the actual song Brighter Than Today, but it's very helpful to have some kind of emotionally uplifting piece that's rooted in an evidence-based worldview that lifts you out of the darkness).

Some people actively dislike music or group singing, but still like the stories that take them through that arc. Some people like "preachy" content that gives people a call to action, and some people hate it and prefer more casual personal stories.

I'm not sure how this holiday will evolve to best meet the needs of the rationalist community and the wider world, but there are many paths I can imagine it taking. I'm glad that the core concept has resonated with so many people, and looking forward to working together to make it better each year.