I was confused and skeptical for quite a while about some aspects of predictive coding—and it's possible I'm still confused—but after reading a number of different perspectives on brain algorithms, the following picture popped into my head and I felt much better: 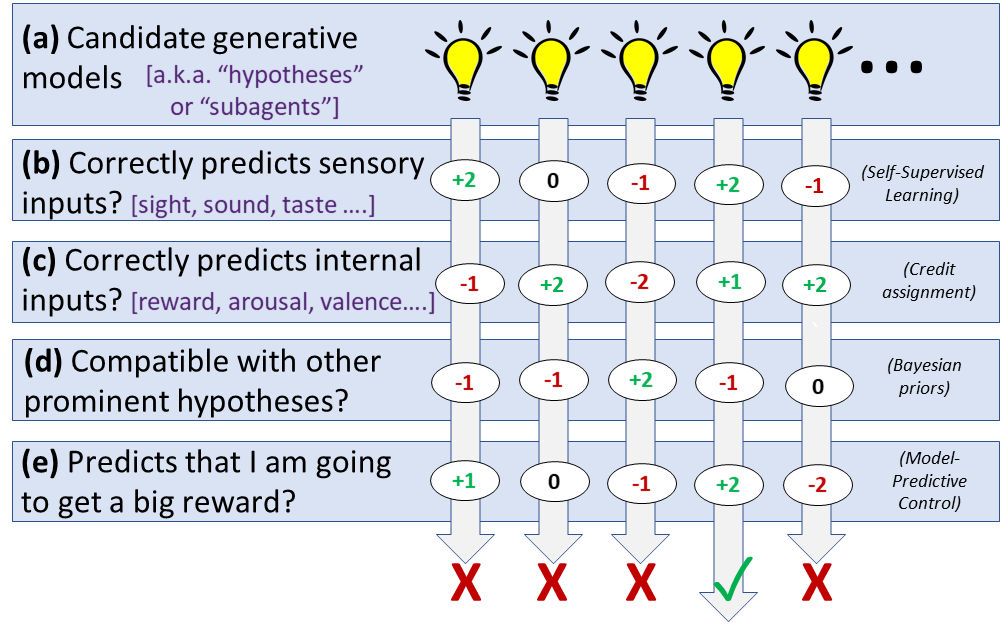 This is supposed to be a high-level perspective on how the neocortex[1] builds a predictive world-model and uses it to choose appropriate actions. (a) We generate a bunch of generative models in parallel, which make predictions about what's going on and what's going to happen next, including what I am doing and will do next (i.e., my plans). The models gain "prominence" by (b) correctly predicting upcoming sensory inputs; (c) correctly predicting other types of input information coming into the neocortex like tiredness, hormonal signals, hunger, warmth, pain, pleasure, reward, and so on; (d) being compatible with other already-prominent models; (e) predicting that a large reward signal is coming, which as discussed in my later article Inner Alignment in the Brain [LW · GW], includes things like predicting that my goals will be fulfilled with minimal effort, I'll be eating soon if I'm hungry, I'll be sleeping soon if I'm tired, I'll avoid pain, and so on. Whatever candidate generative model winds up the most "prominent" wins, and determines my beliefs and actions going forward.

(Note on terminology: I'm calling these things "generative models" in all cases. Kurzweil calls them "patterns". They're also sometimes called "hypotheses", especially in the context of passive observation (e.g. "that thing I see is a bouncy ball"). Or they're called "subagents"[2], especially in the context of self-prediction (e.g. "I am about to eat").

Before we get to details, I need to apologize for the picture being misleading:

Anyway, the picture above tells a nice story:

(b) is self-supervised learning[4], i.e. learning from prediction. Process (b) simply votes against generative models when they make incorrect predictions. This process is where we get the vast majority of the information content we need to build a good predictive world-model. Note that there doesn't seem to be any strong difference in the brain between (i) actual experiences, (ii) memory recall, and (iii) imagination—process (b) will vote for or against models when presented with any of those three types of "evidence". (I think they vote much more strongly in case (i) though.)

(c) is credit assignment, i.e. learning what aspects of the world cause good or bad things to happen to us, so that we can make good decisions. Each generative model makes claims about what is the cause of subcortex-provided informational signals [LW · GW] (analogous to "reward" in RL)—information signals that say we're in pain, or eating yummy food, or exhausted, or scared, etc. These claims cash out as predictions that can prove right or wrong, thus either supporting or casting doubt on that model. Thus our internal models say that "cookies are yummy", corresponding to a prediction that, if we eat one, we'll get a "yummy" signal from some ancient reptilian part of our brain.

(d) is Bayesian priors. I doubt we do Bayesian updating in a literal mathematical sense, but we certainly do incorporate prior beliefs into our interpretation of new evidence. I'm claiming that the mechanism for this is "models gain prominence by being compatible with already-prominent models". What is an "already-prominent model"? One that has previously been successful in this same process I'm describing here, especially if in similar contexts, and super-especially if in the immediate past. Such models function as our priors. And what does it mean for a new model to be "compatible" with these prior models? Well, a critical fact about these models is that they snap together like Legos, allowing hierarchies, recursion, composition, analogies, casual relationships, and so on. (Thus, I've never seen a rubber wine glass, but I can easily create a mental model of one by gluing together some of my rubber-related generative models with some of my wine-glass-related generative models.) Over time we build up these super-complicated and intricate Rube Goldberg models, approximately describing our even-more-complicated world. I think a new model is "compatible" with a prior one when (1) the new model is almost the same as the prior model apart from just one or two simple edits, like adding a new bridging connection to a different already-known model; and/or (2) when the new model doesn't make predictions counter to the prior one, at least not in areas where the prior one is very precise and confident.[5] Something like that anyway, I think...

(e) is Model-Predictive Control. If we're hungry, we give extra points to a generative model that says we're about to get up and eat a snack, and so on. This works in tandem with credit assignment (process (c)), so if we have a prominent model that giving speeches will lead to embarrassment, then we will subtract points from a new model that we will give a speech tomorrow, and we don't need to run the model all the way through to the part where we get embarrassed. I like Kaj Sotala's description here: "mental representations...[are] imbued with a context-sensitive affective gloss"—in this case, the mental representation of "I will give a speech" is infused with a negative "will lead to embarrassment" vibe, and models lose points for containing that vibe. It's context-sensitive because, for example, the "will lead to feeling cold" vibe could be either favorable or unfavorable depending on our current body temperature. Anyway, this framing makes a lot of sense for choosing actions, and amounts to using control theory to satisfy our innate drives. But if we're just passively observing the world, this framework is kinda problematic...

(e) is also wishful thinking. Let's say someone gives us an unmarked box with a surprise gift inside. According to the role of (e) in the picture I drew, if we receive the box when we're hungry, we should expect to find food in the box, and if we receive the box when we're in a loud room, we should expect to find earplugs in the box, etc. Well, that's not right. Wishful thinking does exist, but it doesn't seem so inevitable and ubiquitous as to deserve a seat right near the heart of human cognition. Well, one option is to declare that one of the core ideas of Predictive Coding theory—unifying world-modeling and action-selection within the same computational architecture—is baloney. But I don't think that's the right answer. I think a better approach is to posit that (b-d) are actually pretty restrictive in practice, leaving (e) mainly as a comparitively weak force that can be a tiebreaker between equally plausible models. In other words, passive observers rarely if ever come across multiple equally plausible models for what's going on and what will happen next; it would require a big coincidence to balance the scales so precisely. But when we make predictions about what we ourselves will do, that aspect of the prediction is a self-fulfilling prophecy, so we routinely have equally plausible models...and then (e) can step in and break the tie.

More general statement of situations where (e) plays a big role: Maybe "self-fulfilling" is not quite the right terminology for when (e) is important; it's more like "(e) is most important in situations where lots of models are all incompatible, yet where processes (b,c,d) never get evidence to support one model over the others." So (e) is central in choosing action-selection models, since these are self-fulfilling, but (e) plays a relatively minor role in passive observation of the world, since there we have (b,c) keeping us anchored to reality (but (e) does play an occasional role on the margins, and we call it "wishful thinking"). (e) is also important because (b,c,d) by themselves leave this whole process highly under-determined: walking in a forest, your brain can build a better predictive model of trees, of clouds, of rocks, or of nothing at all; (e) is a guiding force that, over time, keeps us on track building useful models for our ecological niche.

One more example where (e) is important: confabulation, rationalization, etc. Here's an example: I reach out to grab Emma's unattended lollipop because I'm hungry and callous, but then I immediately think of an alternate model, in which I am taking the lollipop because she probably wants me to have it. The second model gets extra points from the (e) process, because I have an innate drive to conform to social norms, be well-regarded and well-liked, etc. Thus the second model beats the truthful model (that I grabbed the lollipop because I was hungry and callous). Why can't the (b) process detect and destroy this lie? Because all that (b) has to go on is my own memory, and perniciously, the second model has some influence over how I form the memory of grabbing the lollipop. It has covered its tracks! Sneaky! So I can keep doing this kind of thing for years, and the (b) process will never be able to detect and kill this habit of thought. Thus, rationalization winds up more like action selection, and less like wishful thinking, in that it is pretty much ubiquitous and central to cognition.[6]

Side note: Should we lump (d-e) together? When people describe Predictive Coding theory, they tend to lump (d-e) together, to say things like "We have a prior that, when we're hungry, we're going to eat soon." I am proposing that this lumping is not merely bad [LW(p) · GW(p)] pedagogy, but is actually conflating together two different things: (d) and (e) are not inextricably unified into a single computational mechanism. (I don't think the previous sentence is obvious, and I'm not super-confident about it.) By the same token, I'm uncomfortable saying that minimizing prediction error is a fundamental operating principle of the brain; I want to say that processes (a-e) are fundamental, and minimizing prediction error is something that arguably happens as an incidental side-effect.

Well, that's my story, it seems to basically makes sense, but that could just be my (e) wishful thinking and (e) rationalization talking. :-)

(Update May 2020: The traditional RL view would be that there's a 1-dimensional signal called "reward" that drives process (e). When I first wrote this, I was still confused about whether that was the right way to think about the brain, and thus I largely avoided the term "reward" in favor of less specific things. After thinking about it more—see inner alignment in the brain [LW · GW], I am now fully on board with the traditional RL view; process (e) is just "We give extra points to models that predict that a large reward signal is coming". Also, I replaced "hypotheses" with "generative models" throughout, I think it's a better terminology.)