The Octopus, the Dolphin and Us: a Great Filter tale

Is intelligence hard to evolve? Well, we're intelligent, so it must be easy... except that only an intelligent species would be able to ask that question, so we run straight into the problem of anthropics. Any being that asked that question would have to be intelligent, so this can't tell us anything about its difficulty (a similar mistake would be to ask "is most of the universe hospitable to life?", and then looking around and noting that everything seems pretty hospitable at first glance...).

Instead, one could point at the great apes, note their high intelligence, see that intelligence arises separately, and hence that it can't be too hard to evolve.

One could do that... but one would be wrong. The key test is not whether intelligence can arise separately, but whether it can arise independently. Chimpanzees, Bonobos and Gorillas and such are all "on our line": they are close to common ancestors of ours, which we would expect to be intelligent because we are intelligent. Intelligent species tend to have intelligent relatives. So they don't provide any extra information about the ease or difficulty of evolving intelligence.

To get independent intelligence, we need to go far from our line. Enter the smart and cute icon on many student posters: the dolphin. 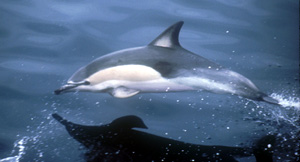 Dolphins are certainly intelligent. And they are certainly far from our line. It seems hard to find a definite answer, but it seems that the last common ancestor of humans and dolphins was a small mammal existing during the reign of the dinosaurs. Humans and dolphins have been indicated by red rectangles, and their last common ancestor with a red circle. 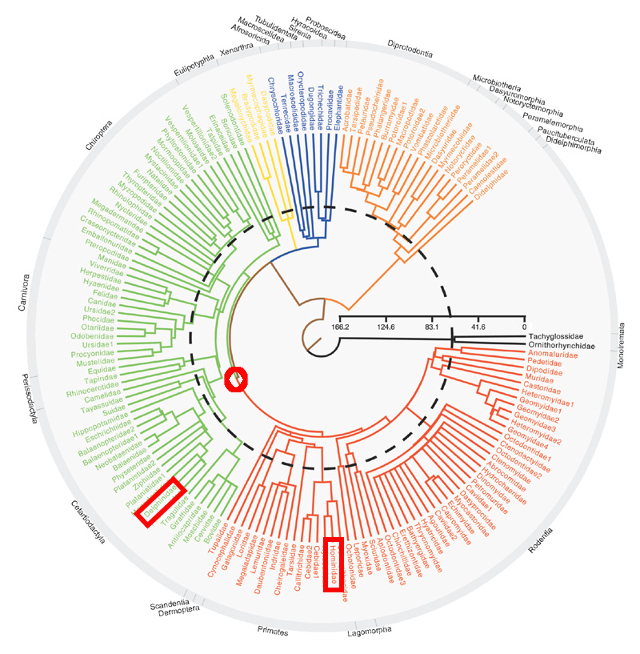 This red circle is well before the K-T boundary (indicated by the dotted line), hence represents a mammal living in the literal shadow of the dinosaurs.

We can apply a convergent evolution argument to this common ancestor. Thus, assuming that subsequent evolution was somewhat independent, getting from that common ancestor to dolphin level of intelligence is something that can happen relatively easily.

Can we go further? Well, what if we applied the argument twice? Let's bring in the most alien looking of the high-intelligence animals: the octopus. 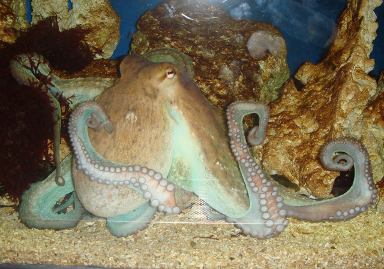 If we accept that assumption, we can then start looking for the common ancestor of humans and octopuses. Our two species are really far apart: 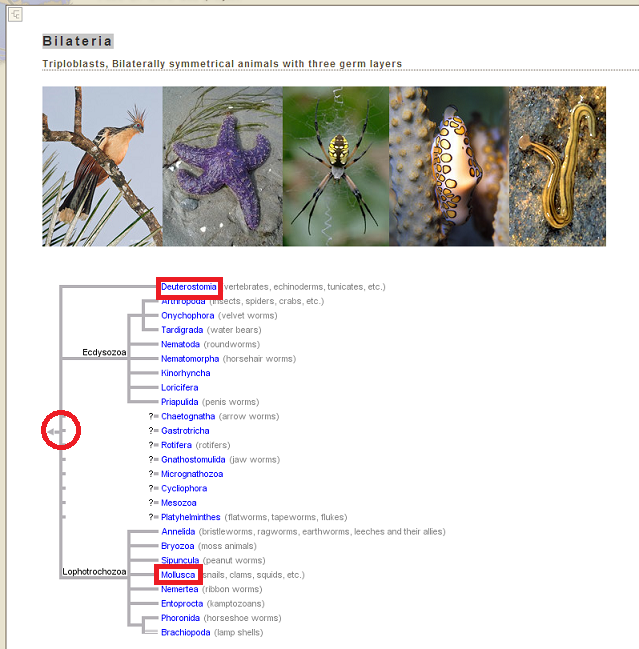 We therefore have to go back to around the last common ancestor of the Bilateria (creatures with bilateral symmetry, i.e. they have a front and a back end, as well as an upside and downside, and therefore a left and a right). This is the (speculative) urbilaterian. There are no known examples or fossils of it, which means that it was likely less than 1 cm in length. To quote Wikipedia: "The urbilaterian is often considered to have possessed a gut and internal organs, a segmented body and a centralised nervous system, as well as a biphasic life cycle (i.e. consisting of larvae and adults) and some features of embryonic development. However, this need not necessarily be the case." Very confusing, and with no information about intelligence level. However, since the organism was so small and since it was the ancestor of almost every animal alive today (including worms and Bryozoa), our best estimate would be that it's pretty stupid, with the simplest possible "brain".

Application to the Great Filter

The Great Filter (related to the Fermi Paradox) is the argument that since we don't see any evidence of complex technological life in the universe, something must be preventing its emergence. At some point on the trajectory, something is culling almost all species. 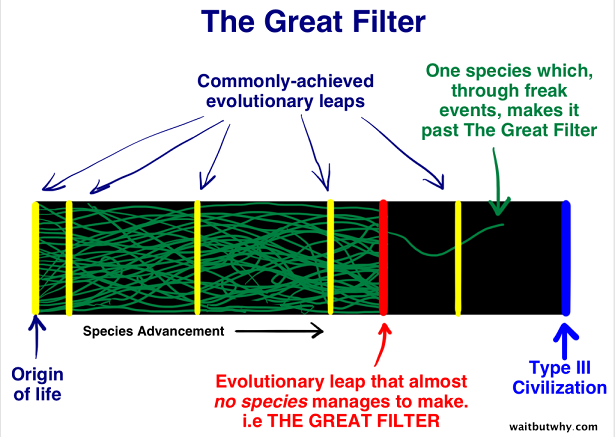 An "early" great filter wouldn't affect us: that means that we got through the filter already, it's in our past, so the emptiness among the stars doesn't say anything negative for us. A "late" great filter is bad news: that implies that few civilizations make it from technological civilization to star-spanning civilization, with bad results for us. Note that AI is certainly not a great filter: an AI would likely expand through the universe itself

The real filter could be a combination of an early one and a late one, of course. But, unless the factors are exquisitely well-balanced, its likely that there is one location in civilizational development where most of the filter lies (ie where the probability of getting to the next stage is the lowest). Some possible locations for this could be:

These categories aren't of same size, of course - the first three are very diverse and large, for instance. Then what the evolutionary argument above says, is that the Great Filter in unlikely to be in the third, bolded category (which is in fact a multi-category).

For what it's worth, my personal judgement is that the filter lies before the creation of a central nervous system.